Today we will be taking a look at Teeka Tiwari’s US Energy Independence Summit.

It is a an emergency briefing hosted by the Wall Street veteran and cryptocurrency guru, Teeka Tiwari. At this event, Tiwari will talk about how you can invest in the energy sector as it undergoes massive changes driven by geopolitical events.

In this review, we will be taking a closer look at what Teeka will discuss at the event as well as what he is promoting.

Teeka Tiwari’s US Energy Independence Summit, as the title suggests, is a webinar hosted by Tiwari where he is expected to discuss how you should approach the energy sector from an investor’s perspective.

It comes following the US government’s decision to ban Russian oil imports because of the Ukraine war that has been perpetuated by Vladimir Putin. Teeka will be approaching the conflict at his first ever energy summit from an investor’s perspective and he will be looking to uncover the most profitable investment opportunities for individual investors. 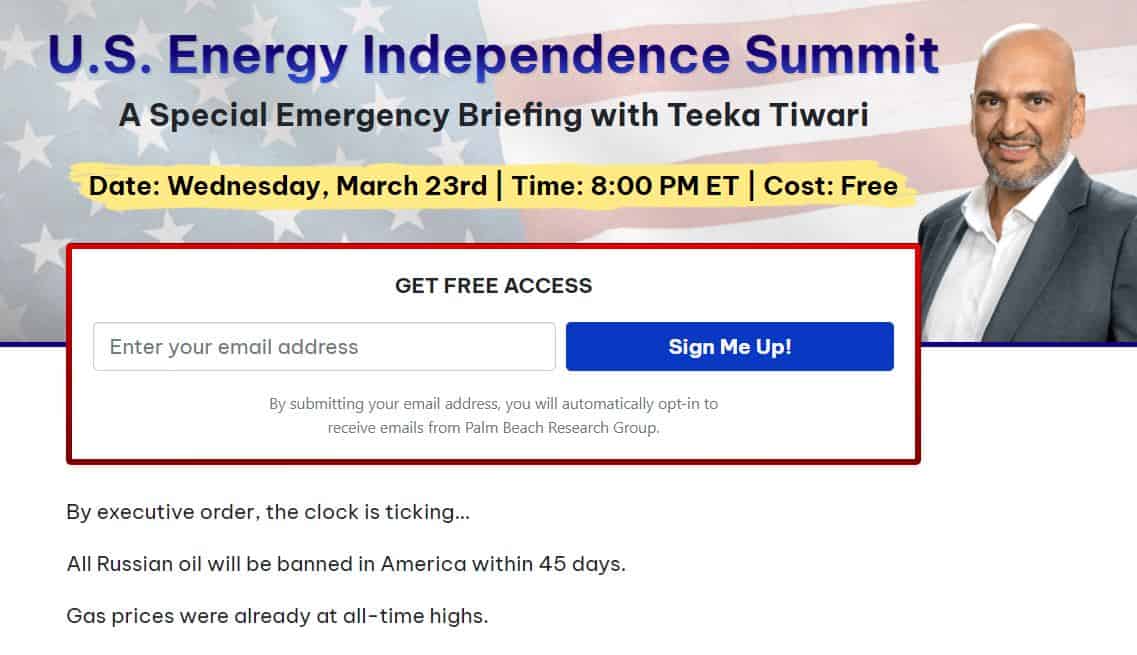 If you’ve been following the news, you know that President Biden recently halted all importation of Russian oil into the US. You also know that prices at the gas pump have been through the roof in recent weeks, a situation exacerbated by the Russia-Ukraine conflict because with less supply, the price will only go up.

Therefore, the government has to find a way to replace that supply, no matter how small, with alternative sources.

Reports suggest that the government has turned to other oil-rich countries to handle the shortfall because domestic supply cannot be ramped up fast enough to avoid a lag.

An Unlikely Solution to Energy Independence

Teeka Tiwari sees an opportunity here for another unlikely source of fuel: a private company that will potentially help the country achieve energy independence.

He claims that this company is made up of the brightest minds that we could ever entrust with the delicate mission of solving the U.S. energy independence conundrum.

Why is he so confident about it?

He says that it has a team of five people, led by a legendary engineer and CEO and with that personnel, they have designed a revolutionary energy breakthrough in a facility in the American heartland.

Teeka believes that this private company has found a way to manufacture oil at a cheaper rate than any other producer, and they don’t have to drill or do fracking.

And due to the low manufacturing costs, they may produce oil that costs 65 CENTS a barrel.

And they will be so good at it, they will produce enough to replace Russia’s supply to America five times over.

He says that although most people are not looking at the company as a viable investment, one “Wall Street powerhouse” has already invested in it and is its largest shareholder.

And with a vote of confidence from what you’d consider a “smart investor,” he says that this deal could be one of the most profitable opportunities of the last 150 years.

Investing in US energy independence

You can deal with the company directly or purchase shares from an investor through a broker. As he was making his announcement about the webinar, the company’s shares were trading at $1.25.

Before the rules were relaxed, it used to be that private investments were only accessible to the rich. That was before the 2012 Jumpstart Our Business Startups Act, or JOBS Act, which now allows retail investors to also buy shares of private firms.

We’ve covered a few of these opportunities before on this website. For example, a while back Teeka hosted an event called Set For Life Summit where he touted a few private investments. The Pre IPO Code by Jeff Brown was also an event that centered on private investments.

Circling back to the US Energy Independence Summit, Teeka will reveal all the details of the private company working on a fuel product that will help America achieve its goal of energy independence.

Who is Teeka Tiwari?

Teeka Tiwari is an easily recognizable name among individual investors. He is the editor of a popular newsletter called The Palm Beach Letter that is published by The Palm Beach Research Group, where he is also the chief investment analyst.

Teeka is a former hedge fund manager and Wall Street executive who’s had to work hard to be where he is.

Due to his hard work and unique understanding of the markets, Teeka Tiwari has had a lot of success as a financial expert that sets him apart from his peers. He is known for his risk management approach when it comes to investing in the capital markets with a goal of reducing the risks of his investments.

In the past few years, he has been urging people to get into cryptocurrencies and little-known and early-stage investment opportunities.

How To Attend Teeka Tiwari’s US Energy Independence Summit

The summit will be online via bigtsummit.com and it is scheduled to happen on March 23 at 8 pm ET. During this summit, Teeka Tiwari will share the details of the private company behind this profit-making investment opportunity. Along with that, he will tell us why investing in this company is profitable.

You will also have the chance of winning the VIP bonus where you have to provide your mobile number. This VIP bonus gives you access to a Private Placement Playbook and Concierge Text Reminder Service.

The summit will be hosted by a legendary investment veteran and financial strategist who’s been around the block for many years. Teeka has been writing about investing in the stock market for many years and he draws from his experience having worked for major Wall Street firms and ran a hedge fund.

A good number of his past recommendations have been popular among individual investors and it looks like he is making another prediction.

However, his past results do not guarantee future success and you should take his general advice with a grain of salt. Evaluate everything objectively before you commit to it.

If you are interested in investing in the energy sector and looking for an exciting yet speculative investment opportunity, then Teeka Tiwari’s US Energy Independence Summit is worth taking a look at. The event will happen virtually and Teeka will share all the details about the investment he is touting.

You have to reserve your place beforehand so that you can attend the summit for free and learn about Teeka’s stock pick in the energy sector. However, if you cannot attend it live, he will share a recording of the event and you can watch it later.