Today will be take a closer look at a webinar invitation by Wyatt Research titled “The NEXT Tesla Motors.”

At the heart of this developing story is a company that Ian Wyatt claims to be the next best-performing EV stock.

EV companies are a favorite for investors who are looking to invest in an industry that may end up being dominant in the future and Wyatt is telling people that he has found one company that may earn profits of up to 839%.

In this review, we will be examining what he is talking about.

The NEXT Tesla Motors Review

Introduction to The NEXT Tesla Motors

It is no secret that Tesla (TSLA) has been doing well over the past few months in the markets. It’s hasn’t been long since it overtook Toyota to become the most valuable carmaker on the planet — and back then it was valued in the region of 200 billion, which it has more than tripled since.

So it doesn’t come as a surprise that Ian Wyatt is associating his next EV stock with the bankable Tesla. He claims that he has found a company that you won’t regret owning for the next decade; but that’s just half of the story. 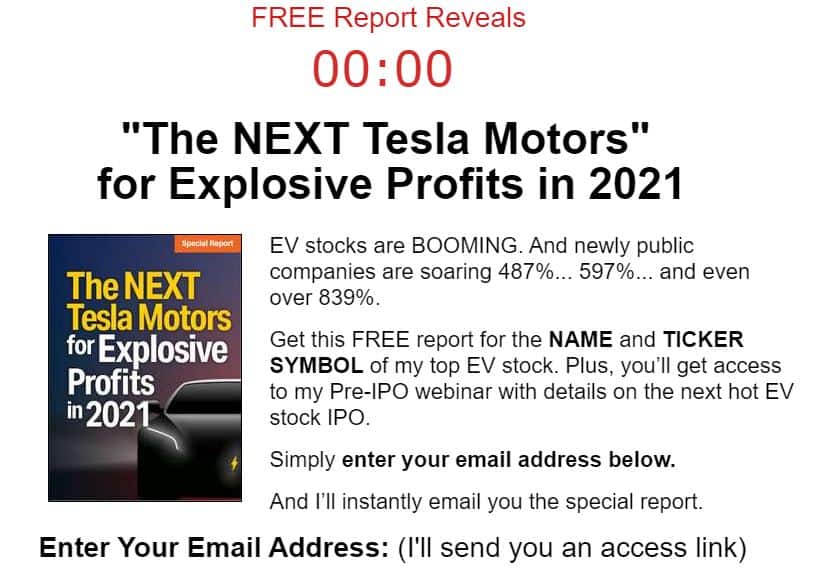 It isn’t a “public company” in the usual sense because it involves investing in a blank check company.

Blank check companies, or Special Purpose Acquisition Companies (SPACS) have been all the rage for the past two years. The newsletter world is certainly catching up with Jeff Brown (Blank Check Speculator) and Enrique Abeyta (Empire SPAC Investor) already launching newsletters centered on them.

So, it also doesn’t come as a surprise that Ian also thinks that investing in a SPAC (that wants to acquire his recommended EV company) is such a good idea. We’ll certainly see this recurring and I’ll be here to cover anything that comes up.

Going back to Ian’s invitation, the company he is teasing as a pre-IPO pick and comparing to Elon Musk’s Tesla could be Fisker, Inc. Why do I think it is? Well, its founder, Henrik Fisker, has come to be known for his sales pitches that are sometimes compared to Musk’s and his company  is being acquired by a SPAC called Spartan Energy Acquisition Group.

He is promising to reveal his pick (which we already have) in a report called “The NEXT Tesla Motors” for Explosive Profits in 2021.

In this report, he reveals the name as well as the ticker symbol of his pick but you don’t have to bother with that since I have done that already.

Who is Ian Wyatt?

Ian believes in making long-term investments that can offer value on your investments and he also believes that you are the best person to manage your own money. All you will need to have is the right approach and he intends to help with that.

His work is designed to help investors take advantage of market-beating investment ideas by finding niche opportunities that the mainstream financial press is oblivious to. So most of his work revolves around small companies such as the EV company he is recommending in this invitation.

We have encountered his work before on this website like when I reviewed The Dollar Wealth Club and 5G Profit Summit.

Why Ian is teasing “The NEXT Tesla Motors”

Ian Wyatt claims that to get the report “The NEXT Tesla Motors” for Explosive Profits in 2021 for free, you should commit to attending his webinar. In this Pre-IPO webinar, he is expected to discuss the investment opportunity in greater detail.

The event name is given as The Billionaire’s Pre-IPO Secret Live Webinar Event that will be held on a private website.

To register for his webinar all you have to do is enter your email address to get your instant profit briefing.

The best part is that you do not need a large investment to start with. You can get started with as little as $10 (which is typically how much SPACs are valued per share).

You will get all the details about the joining process via email. Ian Wyatt hosts daily webinar sessions so that you can pick your most convenient time.

Pros of “The NEXT Tesla Motors”

Is The NEXT Tesla Motors Legit?

The NEXT Tesla Motors is legit. The webinar to which Ian is inviting people is meant to discuss investing in an EV company that we have determined is likely to be Fisker, Inc. Ian Wyatt has 25 years of experience in finance thus this is the kind of thing you’d expect from a man involved in the industry.

Although the webinar is legit, that doesn’t meant that his pick will go up by 460%. That’s merely speculation and may never come to pass.

The NEXT Tesla Motors Verdict

Now that electric cars appear to be the next frontier in the auto industry, it makes sense that investors want cover in the fledgling subsector. Rather than go for household carmakers that are opening EV divisions, you may be tempted to look for the next Tesla, and that’s what Ian Wyatt is banking on when he claims to have spotted what he believes will be “The NEXT Tesla Motors.”

There’s the added twist of it being involved with a SPAC so that makes it a unique pick. Why? Companies that go public through Special Purpose Acquisition Companies require that you do a bit more due diligence than would be the case with traditional IPOs (not that there’s no research to do in “normal” IPOs, of course).

There is a SPACs fever going on and you may be tempted to just throw money at any that come your way because they feel novel, but you have to be more alert because you will be dealing with something relatively new (new for most people, at least).