Welcome to my review of Robby Blanchard’s Commission Hero!

Commission Hero is a new product from Robby Blanchard who is the number 1 Clickbank affiliate in the world.

If you want to read an HONEST review of Commission Hero keep reading as I’m a real member.

I recently purchased his course and I’ve been going through the training so I thought now was the perfect time to share my review.

So let’s get into all the details.

So the difference with this particular review of mine is that I bought into Commission Hero because I wanted to genuinely learn what Robby Blanchard was doing to be the number 1 Clickbank affiliate in the world.

I’ve made my fair share of money already on Clickbank but nothing close to what Robby is doing.

Yes you read that correct, 40k per day, not per month!

I’ve been fortunately to make 40k+ per month online with affiliate marketing but per day? That is just another level completely and one I want to achieve!

That’s why I decided to jump on Commission Hero and find out what it’s all about.

So… what is Commission Hero all about?

The course is about running Facebook ads to affiliate offers on Clickbank (and a few other networks).

Robby focuses on the health and wellness niche and promotes fitness offers, although the course isn’t limited to that.

He has also promoted other niches too but from what I have found inside the course it’s the health and wellness niche that is focused on at least for the training and the bonuses too. 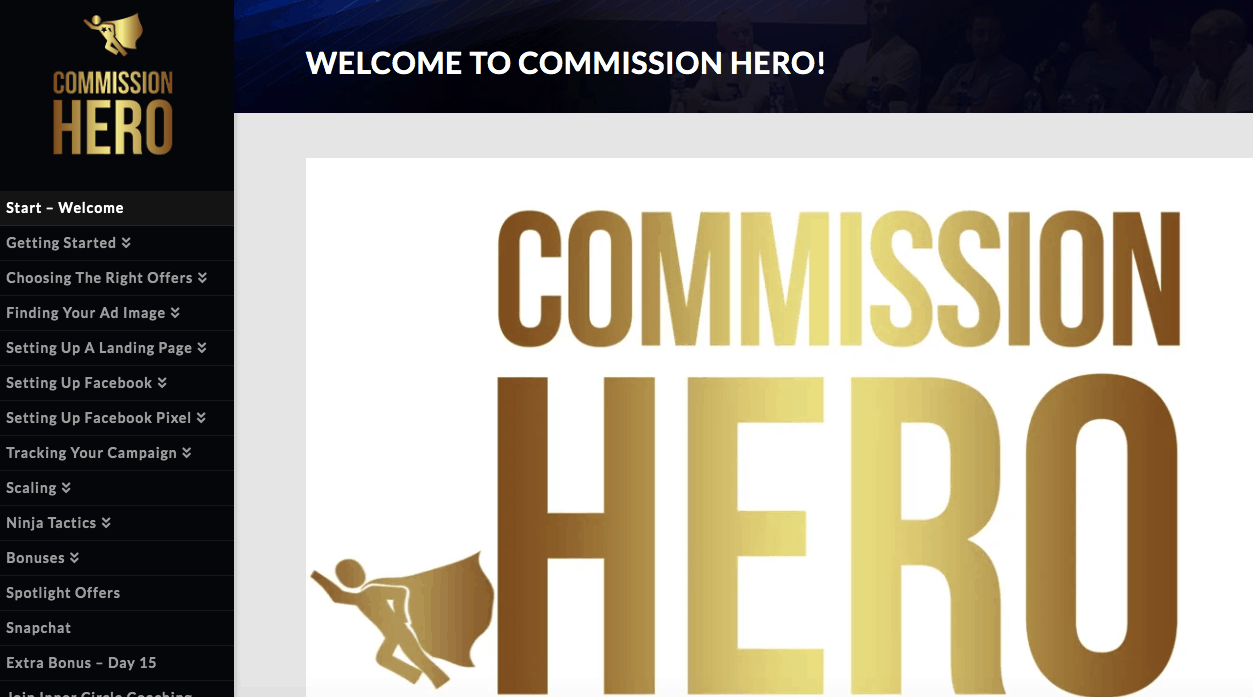 The getting started video is useful and Robby has a whole section covering the basics of how his system works.

Robby covers things like what affiliate marketing is, how Facebook ads work, what tools you need such as ClickFunnels and lays out some expectations for your results.

What Is The Commission Hero Training?

Inside the members area as you can see in my screenshot all the sections of the course are on the left hand side.

Each section also has sub-sections that cover different topics within the main section.

As an example the “Getting Started” section contains:

When you click on any of the training sections there will always be a video from Robby walking you through the steps.

The training steps are as follows.

I’ll briefly explain what each section means although it will be self explanatory a lot of the time.

How Does Commission Hero Work?

So you might be thinking this all sounds great but how does Robby’s system actually work?

How will you really make money with Commission Hero?

The system is actually very simple although there are a few moving parts to get you going.

Honestly though if you just follow the steps in the course it’s not that hard.

If you jump steps and skip ahead you will only end up with a failing campaign which is obviously not what you want.

The overall strategy is as follows:

To do this successfully you will need to create multiple ads and spend money on the Facebook Ads platform.

If you are broke or won’t have any money to spend after buying Commission Hero then this is not the course for you.

Of course, you can get credit cards which would help, but ultimately you need to be willing to spend money on ads.

Like the old saying goes, “you need to spend money to make money”. Whilst that saying isn’t always true in the case of Commission Hero it is most definitely true since we are dealing with paid advertising here.

There are a few things that I really like about the Commission Hero course so big props to Robby for covering these.

Where Robby Could Improve Commission Hero…

There are a few areas I think Commission Hero could be improved.

To be honest I’m sure Robby will probably improve what I am about to mention as the course progresses since it’s still a new members area as it’s only been around a few months.

So what I’m talking about is the members area and layout of the training content.

What I found a little annoying was that when you complete one of the Commission Hero training videos you have to click back onto the menu bar on the left hand side and select the next training video.

There is also no way of knowing that you have already completed the training video.

I think a really simple thing would be for Robby to have a button under each training video that allows you to progress through to the next section and a progress bar or some kind of tick box system.

I also think that Robby should lock down the members area content to force you to go through each step and not skip steps. This would no doubt increase success rate with the course as people would have to go through every step.

I found myself skipping steps just to see what Robby was teaching.

This is not such a big deal for me as I am experienced enough online however for a newbie they could easily skip steps.

Of course, these are minor things and are not even about the content for Commission Hero itself, more just making the members area a better layout so that it’s easier to consume the content and put it into action!

Is Commission Hero A Scam?

It should be obvious from my review and comments that Commission Hero is definitely NOT a scam.

I’ve reviewed 100’s of systems and regularly expose scams so I know exactly what to look for.

Commission Hero has impressed me and I am currently implementing the training to add another income stream to my business.

I’m happy to recommend Commission Hero as Robby Blanchard has put together an excellent course.

If you want to learn real affiliate marketing strategies that have made Robby millions online you need Commission Hero!

Go here to get started with Commission Hero today

(This is a special discount link)