The Escape Velocity Event by Louis Navellier and Eric Fry has been getting a lot of attention because it involves two vocal investment analysts who have differing investment philosophies coming together to agree on an investment approach.

Published by a firm called InvestorPlace, the webinar centers on the concept of “financial escape velocity” that Navellier has been perpetuating for a while now. It involves finding a way not to be weighed down by the gravity of taxes and inflation that eat away at people’s wealth.

Let’s take a closer look at what the two gurus will be discussing as well as what solutions they are proposing.

Escape Velocity Event is an event that will be presented by Louis Navellier and Eric Fry. When they last came together to host an event, it was called The Technochasm Summit.

At this event, they were trying to make sense of how the gap between the rich and the poor has been widening at a high rate, especially since the pandemic began. There have been many rationalizations for why this has happened but Eric Fry and Louis Navellier were saying that it has to do with the kinds of investments the rich made during the pandemic compared to the ones the poor made. 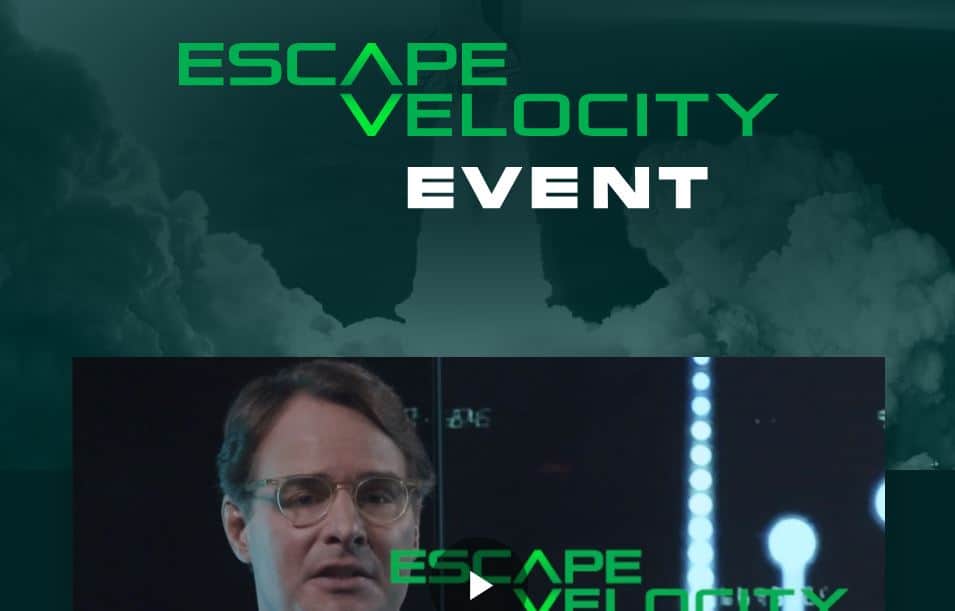 Circling back to The Escape Velocity Event, Eric and Louis are expected to talk about achieving financial freedom. They believe that they have an answer to the widening rift between the rich and the poor and they claim that it all rests on an investment strategy they have developed.

The concept of “financial escape velocity” is what you achieve when you are not weighed down by taxes and inflation, and all other forces that quietly take away your wealth before you can enjoy it.

Eric Fry says that their investment strategy enables you to transform modest stock gains into “epic windfalls” thus attaining that financial escape velocity. He cites examples of Navellier doing well with the strategy before, saying:

“One stock Louis identified a few years ago rose 89% in a few months… but using the strategy they’re about to share, you could have made 1,329% gains on the exact same stock and over the exact same time, based on back- tested examples.

In another case, a stock that went up 124% in four months could have been upgraded to a 967% gain instead.

Or take a third stock that went up 68% in a year — adding just one extra wrinkle could have boosted that gain to 480%… or seven times more.”

He is talking about investing in options rather than directly going for the stocks.

According to Navellier, their options strategy could have outperformed his stock gains by more than 5-to-1 on average based on the results of a comprehensive back test. He reveals the details behind their strategy at the event.

Who Is Behind Escape Velocity Event?

As we have already established, the Escape Velocity Event will be hosted by Louis Navellier and Eric Fry who both work for InvestorPlace.

Louis Navellier is the Chairman and Founder of Navellier & Associates, an financial management firm based in Reno, Nevada. He currently manages approximately $2.5 billion in assets.

Louis Navellier is one of the editors working for InvestorPlace where he manages several investment newsletters, including Growth Investor and Breakthrough Stocks.

In addition to that, his work has been published on platforms like CNBC, Fox News, and Bloomberg.

He used to work for Grant’s Interest Rate Observer where he produced Grant’s International and Apogee Research — these were research products meant for professional money managers.

Eric Fry is known for his track record. For example he successfully shorted numerous technology stocks in 2000 and 2001 and made the right calls.

Eric Fry has written a book called International Investing With ADRs: Your Passport to Profits Worldwide.

The Escape Velocity Event is legit.

Louis Navellier and Eric Fry are two well-known veterans in the industry.

Previously, Eric Fry has made 41 recommendations that have soared past the 1,000% gains mark and for the last forty years, Louis Navellier has been known for uncovering incredible growth stocks before they soar and become household names.

He was ranked #1 among all financial advisories for his 20-year return by the Hulbert Financial Digest. Louis Navellier and Eric Fry have followed varying investing approaches but they think that this new strategy can turbocharge their already-impressive track records.

That being said, take what they talk about with a grain of salt because they have been known for making bad calls too.

During this event, you will reveal an investment strategy that they claim will help you attain financial freedom.

You do not need any investing experience to implement what they propose as long as you are looking for game-changing investment opportunities. This event is all about introducing the phenomenon of growing wealth fast.