Welcome to my review of Keith Kohl’s presentation titled “Invictus.”

It is about a tech race that the US government, the CIA, Amazon, Google, and IBM are all investing tons of capital into but one small-cap stock with 10X potential may win the race and dominate this sector.

Are you interested in learning more about Invictus technology, you have come to the right place because we will be looking into what this is all about as well as the investments that Keith Kohl is teasing.

Keith Kohl quotes Forbes stating that Invictus is the No. 1 tech trend that will transform our world. He regards it a breakthrough that can help early investors make millions yet 99% of the population has no idea it even exists.

Now, this is not the first time Keith Kohl is coming up with such a presentation. We’ve seen him talk about technological trends in presentations like “The 5G Volta $8 Stock” and “Endless Clean Energy” 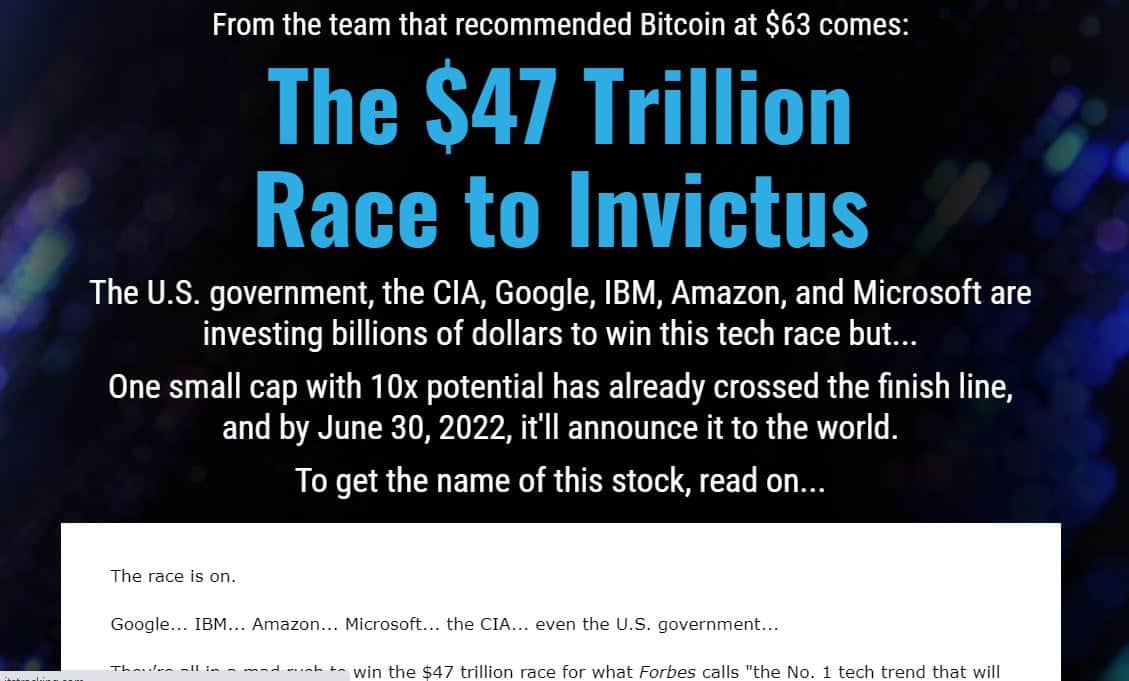 In this presentation, Keith talks about a technology he is referring to as “Invictus.”

So, what is invictus?

We learn that “invictus” is a term he uses to refer to Quantum Computing.

If you’ve never heard of quantum computing, it is a new kind of computing that uses the properties of quantum states like superposition, interference, and entanglement, to perform calculations.

It is different from the kind of computers we have that are technically rely on binary code. As Keith explains in the presentation, binary code is slower than quantum computing because it can only execute one task at a time while quantum can do many things at once. 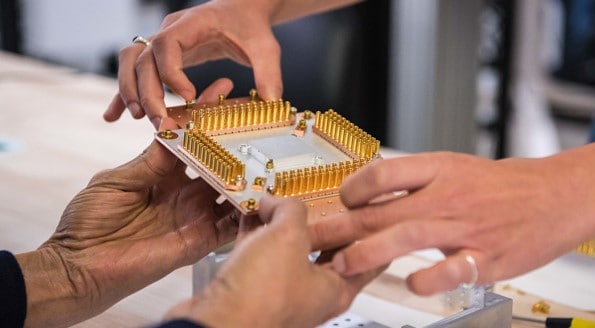 In the scientific community, quantum computing is often seen as the future of computing. We have been seeing new quantum computers outperform even the fastest binary supercomputers by executing commands thousands of times faster.

For example, a quantum computer China recently launched is 10 million times faster than the fastest supercomputer. Google also has its own quantum computer, a 55-qubit Sycamore model. 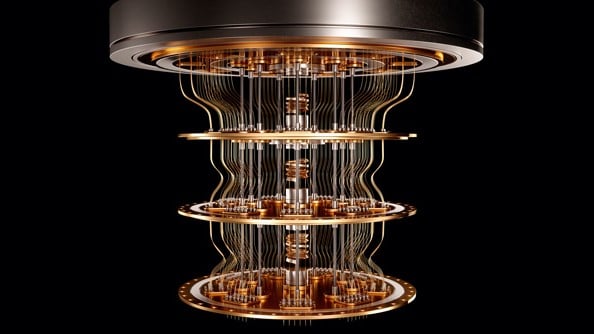 Keith claims that when quantum computing takes off, it is going to be more profitable and disruptive than the internet, blockchain, AI, and 5G combined.

Why is Keith so excited about the future of quantum computing?

He lists a few reasons for this:

Keith believes that quantum computers will enable us to develop better batteries. Batteries are used in Electric Cars and for storage of energy generated from renewable sources and for so long, there hasn’t been a capable battery technology that serves these industries as required.

Circling back to Keith Kohl’s presentation, he says that with better computers, scientists will have the tools needed to improve on the current battery tech that has an average range of 181 miles and charge time of eight hours.

The End of Disease

According to Keith Kohl, the healthcare industry could use better computing power if we wish to cure diseases like cancer, heart disease, and Alzheimer’s that kill millions of people each year.

He alleges that the pharmaceutical drug discovery process is “stuck in the Stone Age” due to poor computing power.

With quantum computing, scientists will use computers to conduct drug trials without human participants.

So instead of running a drug trial on a few hundred people in a few months the old-fashioned way, scientists will now run drug trials on a few billion simulated human beings in a matter of seconds on a computer.

A Disruptor of the Technology Industry (Tech’s Savior)

Keith beleives that the technology sector will benefit a lot from having quantum computers. He goes as far as saying that in the future, every tech company’s growth will rely on it.

He says that companies that are innovative are often limited by computing power but with “invictus,” they will do better. He says that almost all tech companies on the planet are devoting a lot of resources to develop quantum computers and the progress has been impressive: 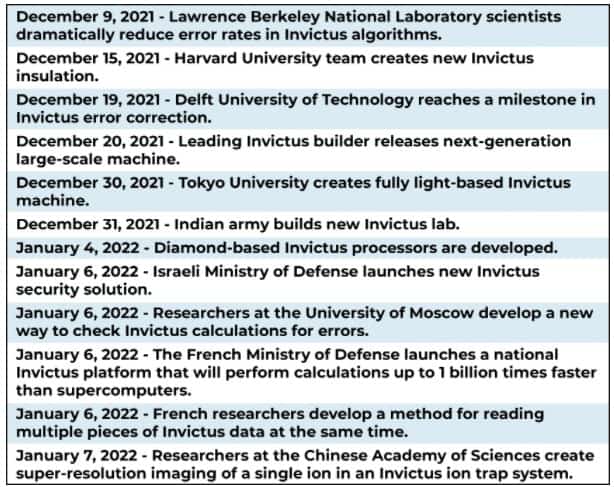 Since Keith is also interested in how an investor can benefit from the introduction of quantum computers, here are some investment recommendations he shares in his presentation:

How to Invest in Invictus

It is a relatively big, established company, and a surprising mention considering that it is not known for creating cutting-edge computer tech. It is better known for making things like home thermostats and helicopter engines.

However, Keith is confident that it has a well-funded research and development division that has made an important quantum computing breakthrough that puts it ahead of the competition. He says that it has built a machine that’s faster than the machines built by Google and IBM.

He expects it to become one of the top five tech companies in the world in the quantum computing revolution and, as a result, have its share price double a few years down the line.

Other stocks he mentions include:

His top recommendation is a tiny company that has built a factory where 40 Ph.D. scientists from Stanford, Caltech, and Yale have developed a patented process for making Invictus technology. The company has 55 patents for its production process.

Its clients are Amazon, MIT, and NASA, among others.

On June 30, 2022, this company may announce its most ambitious project ever and this implies that you should invest before then to have a shot at 10x returns or more.

The second recommendation is a large company that has flown under the radar with respect to the quantum computing revolution.

This company spends $6.8 trillion every year and companies that get their money gain an unfair advantage in their industries. It has dozens of contracts with U.S. Federal government agencies like Veterans Affairs, Health, and Human Services, The Treasury, Labor, Homeland Security, Justice, Energy, Commerce, and Transportation.

The last investment is a basket of stocks that exposes you to almost every company in the Invictus space.

If you invest in this index, you will own a small piece of the over 70 companies within this industry. 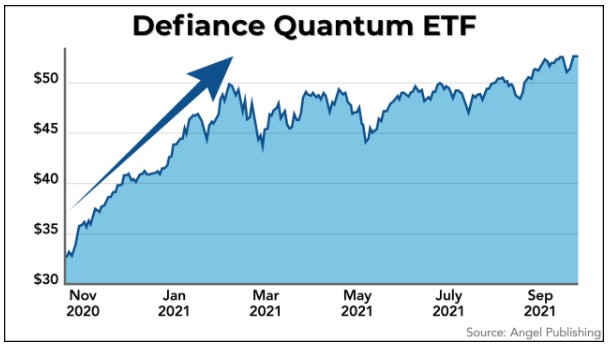 It’s up almost 50% in the last year as shown in the chart and he thinks it could do well in the future as the revolution happens.

To reveal further details about these three investments, you need to read a special report by Keith called Invictus: 3 Stocks for Riding the $47 Trillion Superboom. 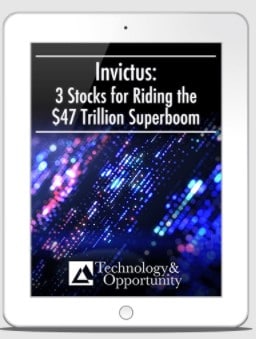 To get a copy of that report, you should subscribe to Keith Kohl’s Technology and Opportunity newsletter.

Who is Keith Kohl?

Keith Kohl is a senior technology analyst at Angel Publishing. He is always on the lookout for new technologies that can make early profits.

He is the managing editor of the Energy & Capital newsletter service. The service has more than 300,000 readers to whom Keith Kohl provides in-depth coverage in the hottest investment trends.

Keith Kohl has made a career out of writing about the hottest stocks in the latest tech trends, including the EV revolution, the ongoing 5G roll-out, as well as the newest players on the scene in robotics, automation, and anti-aging technologies.

This time, he is focusing on quantum computing.

How Does Technology & Opportunity Work?

Technology & Opportunity is a newsletter by Keith Kohl where he writes about new investment opportunities in the technology sector.

When you sign up for it, you get a free copy of the report about “Invictus” stocks as well as three more special reports with big opportunities to consider. The three are:

You will get access to these special reports only when you sign up for the Technology and Opportunity newsletter service.

Other benefits of a membership include…

There are two subscription plans available:

Invictus is a legit presentation by Keith Kohl.

Keith Kohl is an experienced financial writer who has been monitoring the capital markets for a considerable amount of time. He has experienced many significant events that have reshaped their industries and for that reason, he is someone worth hearing out when he talks about trends in the industry.

And that’s even before we have taken into account his track record of making good calls over the years. Therefore, when he says that the quantum computing revolution is the next major trend, it is worth considering. Don’t forget that he is also not the only analyst saying this and various developments in the sector are proof of this.

That being said, his past experiences and successes are not a guarantee that he will be right this time. He may be wrong and all his recommendations may fail to do well. Therefore, approach this with an open mind and a healthy dose of skepticism.

After watching Keith Kohl’s Invictus video, one thing I came away with is that he has done a bit of research about quantum computing from the investor’s vantage point. He tells us that he been at the forefront of major trends in other industries and been quite successful at it.

This time, he has shifted his focus to quantum computing saying that his four picks are likely to benefit from the quantum computing revolution. A move that he believes will affect other industries worth trillions of dollars.

He is right about the fact that scientists are hard at work developing better computers because they are needed for the processing power to handle bigger and more complex computations.

As of writing this, quantum computers are not widely used and you can say that they are still at their infancy (relatively). So, it is hard to tell what company or companies will be the frontrunner(s) besides Google and other Chinese companies that he has omitted from his recommendations. Therefore, take that into consideration if you are going to follow his advice.