A presentation Jeff Brown did recently titled “iCar” or “November 19, 2021: R.I.P. Tesla” has been getting a lot of attention.

It is about the electric vehicle industry and the fact that Apple could make its entry into the industry with a new car — “the iCar” — and send one tiny company on a 1,000% run in the stock market.

In this piece, I will walk you through the presentation to highlight the main points Jeff Brown made as well as the investment he wants you to consider making if Apple releases its car.

For the past few years, there has been talk that Apple is working on its own version of an electric car.

I even recently did a presentation titled Profits from Apple Cars by a guy called Bill Spencer where he was also calling Apple’s alleged vehicle an iCar (coincidence?) and telling his audience that they should invest in the companies that will supply the parts. Bill said that although he thought the iCar would not be coming to market soon, you could profit from it before that (he mentioned November 5th).

Jeff follows the same template more or less in his presentation “iCar”: 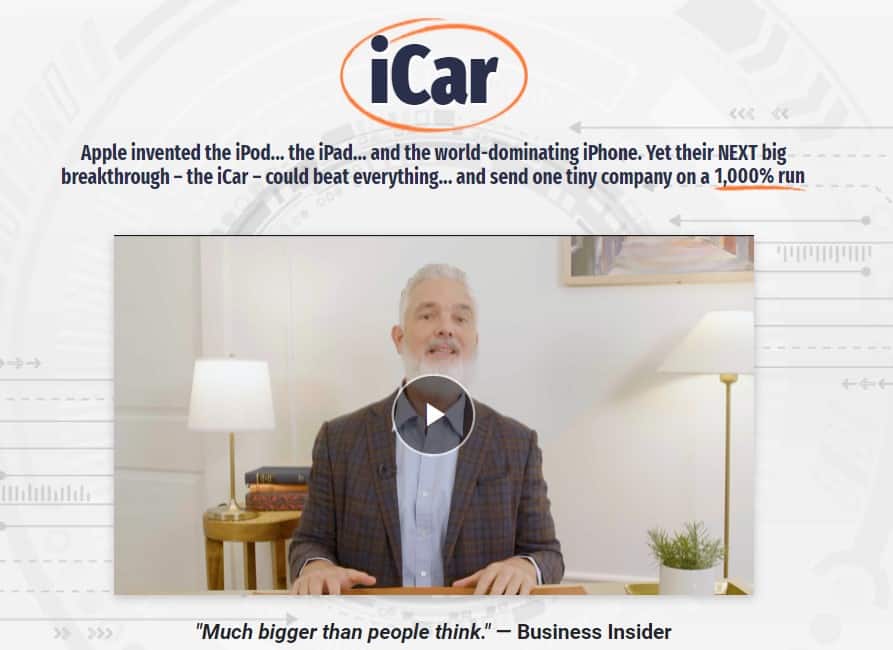 As I mentioned earlier, the presentation has two titles and depending on where you find the link to it, sometimes it looks like this:

Bar the preamble, it is the same pitch and Jeff Brown promotes the same investment in both.

Going back to the presentation, Jeff acknowledges that the Electric Vehicle (EV) industry has been on a hot streak this past year. We have seen EV manufacturers and pick and shovel companies do quite well.

Even legacy carmakers have been working hard to add Electric Vehicles to their line ups with some planning to go fully electric long-term.

Jeff Brown thinks Apple is on the verge of rocking the industry “sooner than you might think” with an electric vehicle that could end up being a bigger project than the iPhone. This is a bold claim considering the impact the iPhone has had on not just the cell phone industry but a host of others too.

He is banking on Apple dominating the competition the way it has with its other products (like the iPod, iPhone, and Apple Watch) that have not only outperformed the competition, but also redefined the game.

This is why he makes that “RIP Tesla” claim because in releasing an electric car, Apple will be in direct competition with Tesla, which has pretty much been in pole position within the industry so far.

Apple has been coy about the subject and the company has never really publicly made an announcement that it is working on a car.

However, rumors has it that it is working on its version of an EV that could come with self-driving capabilities. There have been concept models making the rounds on the internet of the iCar. 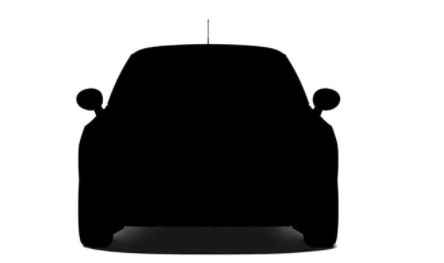 Jeff notes that even Ming-Chi Kuo, who is widely considered the most tapped-in Apple insider on the planet, is convinced the electric car will be Apple’s ‘next star product.’

Sources suggest that the EV project by Apple, called Project Titan has 5,000 workers and that it has been going on for the past few years. There have been suggestions that it has invested 24 times more on this project than it did when it launched the iPhone (makes sense considering a car is magnitudes more capital intensive than a smartphone).

Jeff claims that Apple has been pouring all its engineering might into this project. They even tapped Tesla’s top engineers as well as qualified executives from BMW, Ford, and Mercedes Benz. Nevertheless, the company has kept it under wraps.

Jeff Brown agrees with other analysts who believe that Apple could  make a surprise entry and shake up the EV industry. But he won’t be telling his followers to invest in the tech giant.

How Jeff Brown wants you to invest in the iCar

Rather than directly buy Apple stock, Jeff wants you to go for the smaller companies that will potentially be in the supply chain. Telling people to go for the smaller companies involved in the production of a big product by a big company is typical of Jeff Brown. We’ve seen him do this a couple of times, including in his presentation titled “Elon Musk SAV Project Technology” where Tesla was the focus.

Jeff Brown asserts that by investing in tiny companies in the supply chain, you earn bigger stock market returns than you would get from investing in Apple.

He says that this has been evident in the past when companies that supplied iPhone  and Macintosh parts went on a tear due to this association.

To cash in on the iCar, Jeff wants you to invest in a tiny company that is 500 times smaller than Apple that could become a key partner in the project. He has earmarked November 19 as the day when there will be a major announcement that will trigger a bull run.

The company is run by the “Steve Jobs of Cars,” whom according to Jeff, is known for making big bets and is quite influential in the electric car industry. On top of that he is an immigrant who was instrumental in the rise of Tesla because he was brought in to design the first Tesla car.

Jeff says that a prototype electric car by the tiny company was spotted at Apple headquarters where Apple engineers wanted to take a closer look at its revolutionary technology.

However, he clarifies that there is no guarantee of “any kind of partnership with the tech giant. And there’s no official contract on the table yet.”

But he believes that the two companies will be a perfect fit for each other. And further evidence of this is the fact that the tiny company entered a major deal with another company that Apple uses to assemble nearly all its products.

Jeff also mentions that big name investors like Morgan Stanley, BlackRock, Vanguard, Bank of America, and private equity giant Apollo are positioning themselves “for what’s coming for this tiny stock.” 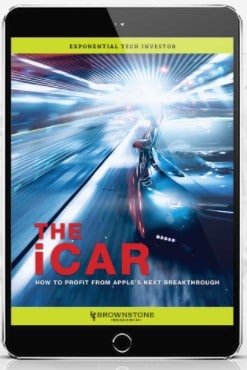 He’s written a report about this company titled The iCar: How to Profit From Apple’s Next Breakthrough.

In it, he reveals every detail about the tiny company that led him to believe that it could make for a good investment.

To get a copy of the report, you have to sign up for Jeff Brown’s Exponential Tech Investor newsletter.

Who Is Behind Jeff Brown iCar?

Jeff Brown is the founder and Chief Investment Analyst of Brownstone Research, a boutique financial publishing company. For the past three decades, he has been spotting bleeding-edge technologies. He is a high tech insider who finds investment opportunities that can result in excellent profits.

Jeff has more than 25 years of experience as a high-technology executive during which he has worked with technology companies such as Juniper Networks, Qualcomm, and NXP Semiconductors. His areas of experience include broadcasting, video technology, technology infrastructure, IT networking and security, consumer electronics, and automotive.

He has an undergraduate degree in aeronautical and astronautical engineering and a master’s degree in management from the London Business School. Jeff Brown uses his experience in technology, finance, and business to find investment opportunities on the verge of exponential growth.

The Exponential Tech Investor is among the newsletters that Jeff Brown edits over at Brownstone Research. 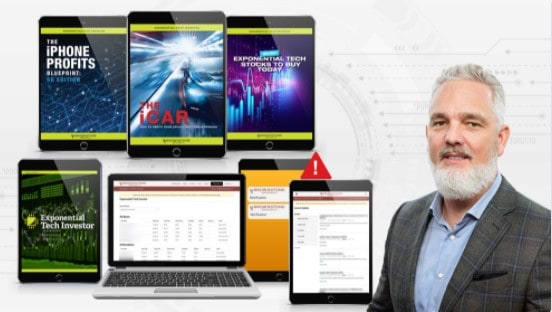 He claims that having many subscribers means that he cannot recommend small explosive technology plays  because it could create a surge in demand for those companies and send their prices soaring before many readers have had a chance to invest.

Therefore, he launched Exponential Tech Investor to recommend tiny companies working on cutting-edge breakthroughs with the potential for big returns because it has a smaller leadership comprising his hardcore followers.

So far, he has made 75 recommendations involving companies in 5G, virtual reality, artificial intelligence, predictive medicine, and the blockchain. In the past one year, he says that the average stock he has recommended has more than doubled in value, rising by 106%.

When you sign up for The Exponential Tech Investor, you get a free copy of the special report I mentioned above The iCar: How to Profit From Apple’s Next Breakthrough.

In addition to that special report, the Exponential Tech Investor newsletter also includes:

Jeff Brown does NOT OFFER CASH REFUNDS for this newsletter. He does, instead, have a “credit refund” that you can get if you decide to unsubscribe from the newsletter: 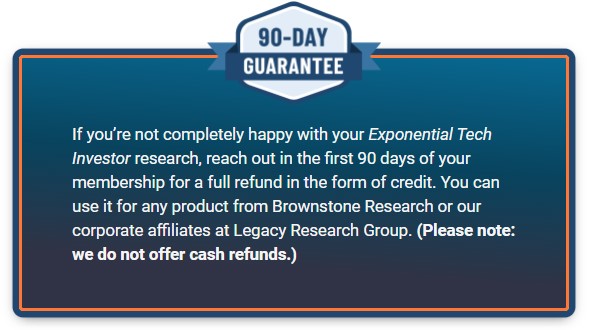 As you can see, you have to express your desire to unsubscribe within 90 days to divert your money to another newsletter.

Although Apple has remained silent over this, there is a possibility that it is working on a car. It may release it a couple of years or a decade down the line but it makes sense that it may want to be involved in an industry could wind up being lucrative. It needs to diversify its product line so this makes.

On top of that, I think the presentation is legit because Jeff Brown is a legitimate analyst who has been writing about tech investments for a while now. He is a renowned investment veteran who has decades of experience.

If you are interested in investing in early-stage tech opportunities, then you may want to take a closer look at what Jeff Brown has proposed here. You may not invest in the company he is waxing lyrical over but it could be worth looking at other opportunities in the EV space.

He requires you to invest $2,000 per year in his newsletter to learn more about his recommended company. If you can pony that up, you could recoup your investment if his recommendations come good.

But since he is recommending tiny companies, a great level of risk comes with the possibility of big returns because these companies are inherently riskier and more volatile than brand-name companies.