Wondering what Elon Musk’s SAV technology aka S.A.V is all about?

Jeff Brown released a presentation that has gone viral about what he refers to as Elon Musk’s Next Big Project, SAV.

In the presentation, as he introduces us to the SAV project, he tells us that it “could even put up to an extra $30,000 in your pocket every year,” which we will learn more about in a bit.

In this review, we will be delving into the project to see what Jeff is talking about and by the end, you should be in a position to decide whether Elon Musk’s SAV project is for you or not.

Jeff Brown, who’s known for talking about promising tech innovations and how investors can make money off of them, recently did a demonstration where he was talking about a project called the S.A.V. 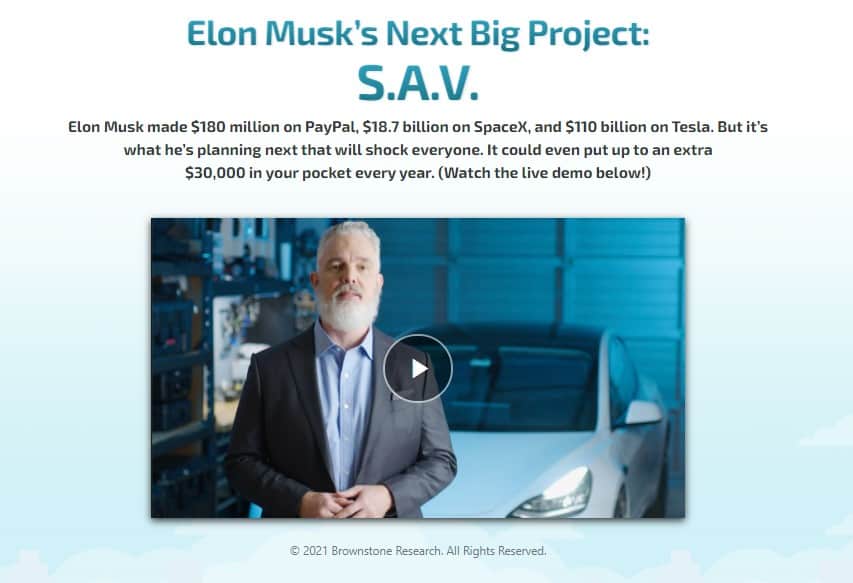 According to him, Elon Musk the CEO of Tesla, SpaceX, Neuralink, and The Boring Company who is known for his desire to implement futuristic ideas, is up to something new that may potentially be big not only in the tech sense but also for investors.

This grand project has to do with Tesla (TSLA) because Jeff has one of their car in the presentation.

Circling back to the SAV project, what does it mean and entail anyway?

SAV is an acronym for Shared Autonomous Vehicle.

To help us understand what that is all about, Jeff explains that Tesla (TSLA) isn’t a carmaker in conventional terms.

He tells us that it is also an AI (software) company and that when it develops a car, it creates the software first and then builds the car around it.

It’s no secret that Tesla has been working on self-driving cars that they call “Robotaxis.” It is also pretty obvious that this is what Jeff was referring to when he coined the “shared autonomous vehicle.”

How they work is that when you buy a Tesla car, there will be a phone app that will enable you to convert it into a taxi and since it will have fully self-driving technology, it will drive itself around and earn you money.

This is where Jeff got that $30,000 figure he says people will earn (gross profit) from their Tesla as a taxi business per year.

This reminds me of a presentation by Whitney Tilson about TaaS (Transportation-as-a-Service) where he also predicted that autonomous cars will be a thing in the future.

As you’d expect from a newsletter editor, when it comes to investing with the SAV project in mind, it is not as straightforward as just buying Tesla stock or derivatives.

There is a twist in the tale and we will be addressing that later.

Who is Jeff Brown?

Jeff Brown is the founder and lead analyst at Brownstone Research, a boutique investment research firm that he launched in 2020 to give general investment advice to retail investors.

Jeff graduated from Purdue University with a degree in aeronautical and astronautical engineering. He has a master’s degree in management from London Business School and professional certificates from Stanford, and Yale School of Management.

He spent 25 years working as a high-technology executive at companies like Qualcomm, Juniper Networks, and NXP Semiconductors. Nowadays, he is an active angel investor in early-stage companies and is an active board member and adviser to several companies.

Almost all his advice centers on technology companies on the verge of exponential growth.

He edits a couple of newsletters, including Exponential Tech Investor, Early Stage Trader, Blank Check Speculator, and The Bleeding Edge.

How Jeff wants you to invest in Elon Musk’s SAV Technology (S.A.V)

As I mentioned above, Jeff doesn’t just want you to buy Tesla stock or options or anything like that.

Instead, he wants you to invest in a small Tesla supplier.

He justifies this by saying that since the supplier is smaller than the carmaker, its value can soar when robotaxis become a thing – to be fair, the hype may have already been priced into Tesla by now.

So here are the details he gives about the company:

He has placed all the details regarding this company in a report called How to Make a Fortune From Tesla’s Secret Supplier. Inside, you can find the name and ticker symbol of the company he is teasing. To get the report for free, you have to sign up for his newsletter, The Near Future Report.

The Near Future Report is a premium advisory service he offers via Brownstone Research and an annual subscription costs $49 (with a 60-day money-back guarantee).

His approach with this newsletter is to find companies that are working on technologies that he thinks are on the verge of mass adoption.

He has said this of things like 5G, precision medicine, cloud computing, gene editing, and AI.

As a subscriber, you will get monthly newsletters with new investment opportunities and access to the model portfolio.

You also get two other reports for free, namely My #1 Pure 5G Play and The New Economy: 5 Stocks That Will Soar in the “Post-COVID” World.

Is SAV aka Elon Musk’s Next Big Project (S.A.V) legit?

Jeff Brown’s presentation about Elon Musk’s Next Big Project, the SAV, is legitimate, and here’s why:

In an earnings call towards the end of January, Musk told shareholders that the market valuation of Tesla made sense if you account for the billions of dollars’ worth of cars that the company would sell as robotaxis – this must be what Jeff picked up on.

According to him, as self-driving technology improves, the cars will become robotaxis and the company will earn more revenue from them through the software.

Musk says, “If you made $50 billion worth of cars, it would be like having $50 billion of incremental profit, basically because it’s just software.”

That way, it makes sense that Jeff made the presentation touting it as Musk’s “Next Big Project.”

Is he right about the supplier? I suppose we’ll just have to wait and see how that will pan out.

You can tell that this presentation is about the advent of fully self-driving cars, how they will be used to render transport as a service, and the companies that will lead the charge. Jeff is backing Tesla in this.

By fully self-driving, we are referring to a car that doesn’t require a human on the steering wheel. There are levels of self-driving to take into account and they range from zero to five. A level zero self-driving is a car that relies on total human control while level five can function without human input entirely. A robotaxi is a level five and so far, no company has produced that (the self-driving capabilities Tesla already has are level three).

The answer to how close we are to fully self-driving cars depends on who you ask.

Some experts agree that we are at least decades away from fully autonomous cars on the road and some who are more optimistic think we are probably just ten years away from seeing them on our roads.

The robotaxi project is what Elon Musk thinks the massive value of the company is attached to – that the carmaker’s foray into advanced self-driving cars justifies its disproportionately large market cap.

And he is not too far off because most investors already presume that the company’s vertical integration – and that includes the software element – is what its value is being derived from.