Today, we will be taking a closer look at Louis Navellier’s Dark Pools Summit.

The presentation, which was done by Louis Navellier — one of the most prominent investment gurus at InvestorPlace, is about how you can capitalize on Wall Street’s “hidden trades” before they move the market for the opportunity to earn up to 500% in positive returns.

In this review, we will be taking a look at Navellier’s investment strategy to determine whether his claims have merit.

Louis Navellier’s Dark Pools Summit is a presentation where he talks about the dark pools, which he believes give Wall Street access to a lot of money. He says that Dark Pools are known to be one of Wall Street’s most sacred inner sanctums, a hidden world where the rich get even richer. 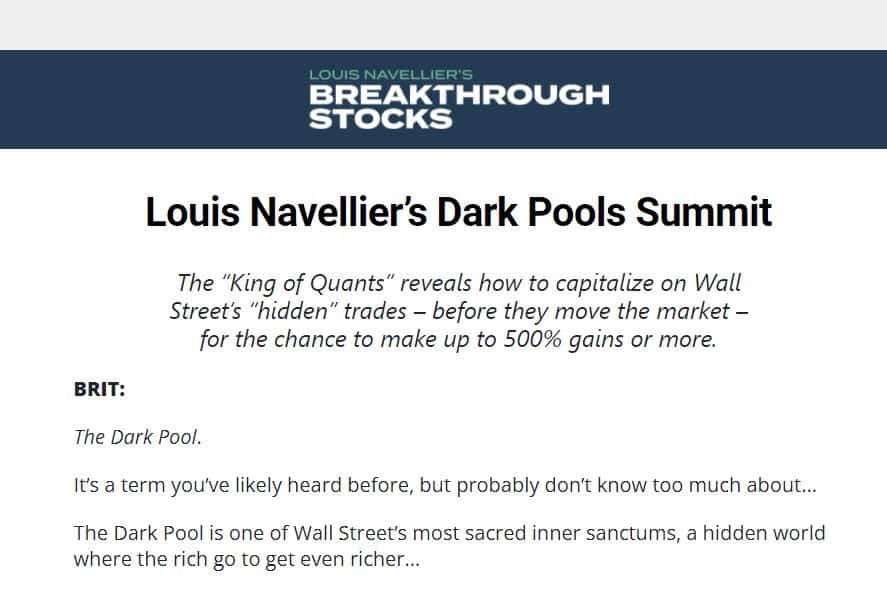 According to Louis Navellier, Dark Pools are off-limits to the everyday American yet if an investor knows what’s happening in them, they can reliably predict how stocks will move.

So in this presentation, Navellier says that he wants to pull the curtain on the hidden world of dark pools to reveal how average Americans can make those amazing gains for themselves.

What is a Dark Pool?

A dark pool is a stock exchange platform where institutional investors place their trades. They are not an unusual phenomenon designed by the powers-that-be to  help the rich accrue more wealth at the expense of the individual investors.

They are actually sanctioned by regulators and a lot of trading in the stock market happens through them. It is estimated that up to 40% of all trades happen in dark pools.

What are they and why is Louis Navellier paying attention to them?

You see, while individual investors predominantly buy and sell shares on a public exchange like the NASDAQ or the NYSE, institutional investors do not typically trade like that.

They normally trade in separate exchanges because they deal with large-volume trades. By this, I mean that when they buy or sell shares, they trade by the millions or even tens of millions and such huge trades, if done on the public exchanges, can impact the price of the stocks involved before the deal is even sealed.

For example, when an institution wants to buy millions of shares on a public exchange, the order would drive up the purchase price before it has even been filled and they wouldn’t be able to open the position at their desired price.

The inverse would happen when they try to offload shares; they would drive the prices so low that they would lose value each time.

This is dictated by the law of supply and demand which posits that when there is a large supply of something (like when millions of shares of stock are available when an institutional investor is selling), the price goes down and vice versa.

And that’s why dark pools are necessary because they give institutional investors a fair deal when they trade.

The word “dark pools” makes it sound secretive and sinister but they are not an illegal cabal that Louis Navellier is exposing.

Why Louis Navellier is Talking about Dark Pools

Louis Navellier is not wrong when he says that if you had your finger on the pulse when it came to Dark Pools, you’d predict how certain prices would move beforehand. That’s because when a trade is completed in a dark pool, when it is eventually made public, there tends to be a price change that corresponds to how the trade went.

For example, if a highly-regarded investor purchases a large block of shares of company X, other investors will want to also own those shares because they’ll figure that the investor in question must have seen something good about company X.

This heightened demand will lead to an uptick in the share price of company X, at least in the short term.

So Louis Navellier argues that if you could predict how institutional investors trade, you’d take up certain positions that would pay off when the trades in question were made public.

Unfortunately, Louis Navellier cannot just “look into” the dark pools to check how trades are being made. After all, event he participants typically don’t know what’s going on in the dark pools (it’s in the name “dark” pool).

So, he does the next best thing: predict how institutional investors are likely to trade through technical analysis.

Louis says that he developed a system that “knows what Wall Street looks for when it’s considering a massive stock purchase, before they secretly pour billions into a particular stock using the Dark Pools” and the system uses high-speed computers.

With his system, he claims that he can determine the massive buying and selling that happens in the dark pools before it moves the stock. He says that this system has led him to some extraordinary returns. For example, he made 273% gains on Enterra Energy, 172% gains on Spreadtrum Communications, and 169% gains on Nutrisystem.

Navellier says that predicting how institutional investors trade benefits him in two ways:

Louis has used this tactic to beat the market 6-to-1 for several years in a row.

Navellier says that predicting how Wall Street trades is easy because those big investors follow predictable patterns when deciding what to trade. He says this because he believes that having worked on Wall Street, he understands how things work there.

After all, he even considers himself one of them as he mentioned in his pitch titled I’m A One Percenter.

So, what does he look for when he is trying to predict how Wall Street is going to trade? He says that he has found one metric to be the most important consideration that money managers make: Earnings.

“…earnings are kind of like a company’s “report card.”

It shows how the company’s doing…

A company with strong earnings is making money, managing it well… and can use that money in the future to improve its products and develop new ones… or pass that money on to shareholders in the form of dividends…

But even earnings are too general for him. So, he splits them into eight categories:

He says that when evaluating a stock, he ensures that all these factors are lined up. He says that they must meet an assigned value for him to consider a stock worthy of investment.

He creates something called an “earnings profile” of each company based on the eight factors and assigns them a “quantum score.” Each stock worth recommending must meet a certain threshold.

His system does not dwell on large-cap stocks because they typically earn meagre returns. Instead, he prefers smaller companies because he believes that every now and then, Wall Street “piles into smaller, off-the-radar stocks.”

By smaller companies, that does not mean penny stocks because after all, Wall Street firms are not allowed to invest in them.

Louis has put together a list of small companies with high quantum scores that he wants you to consider investing in. He has written a report containing those companies that he calls Five Breakthrough Stocks That Could Soar 1,000% in Total! 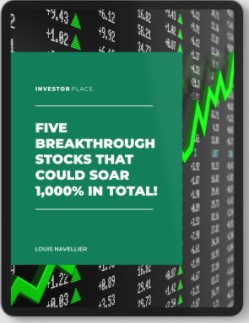 You may have heard about him as he is considered one of Wall Street’s renowned growth investors. For more than three decades, he has been providing investment advice to tens of thousands of investors. During that period, he has earned a reputation of being a savvy stock picker as well as an unrivaled portfolio manager.

Louis Navellier has a 35-year long investing career and a steady track record as a renowned financial newsletter editor who publishes his work at InvestorPlace. InvestorPlace is one of the oldest financial research firms in the country having been around for more than four decades.

Navellier edits a couple of newsletters at the firm, including Growth Investor, Power Options, and Accelerated Profits. He writes about a wide range of tools and strategies that everyday investors can use to beat the market.

How Does Breakthrough Stocks Work?

As I mentioned earlier, Louis Navellier has a Research Service called Breakthrough Stocks that you have to sign up for to get those investment opportunities that have high quantum scores. 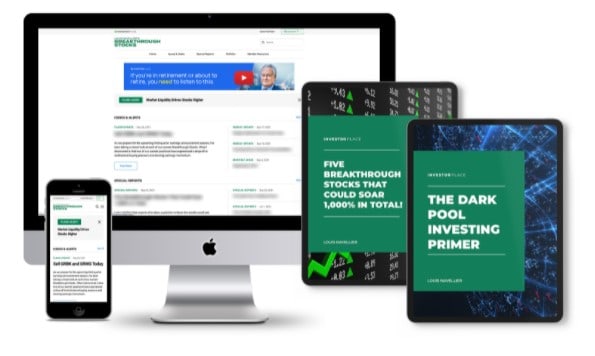 Once you become a subscriber, you’ll receive an average of four stock recommendations each month.

Each month, he will also keep you posted on what’s currently going on in the markets with regular newsletter research issues including which sectors are heating up or cooling down, mega-trend opportunities that Wall Street is focusing on, and any big market corrections.

As I already mentioned, you will receive a free copy of the report called Five Breakthrough Stocks That Could Soar 1,000% in Total. This bonus report covers the name, ticker symbol, and buy-up-to price of each of the five stocks he wants you to consider investing in. 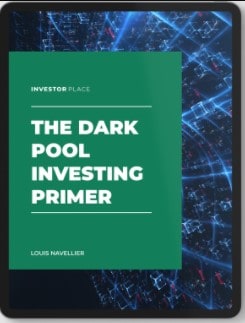 There’s also a second report called The Dark Pool Investing Primer where he reveals the details of how Wall Street executes its trades in the Dark Pools and how the Dark Pools can be used to predict if a big market correction is coming.

If you sign up via the link at the end of the presentation, you get to join for $1,595 for one year. The usual price is $2,999 per year so he is giving you a discount.

Although you’ll pay $1,595 in your first year of membership, the newsletter renews automatically and you will be charged $2,195 every year (plus applicable taxes).

As you’d expect of such a high-priced newsletter, there are no cash refunds.

However, you can get a second year for free if at the end of 12 months, Louis Navellier will not provided you with seven 100% winning picks in his model portfolio.

Louis Navellier is a genuine investment analyst who’s been actively offering investment advice to his followers for more than three decades. On top of that, he runs a money management firm called Navellier that has all sorts of clients.

All that doesn’t mean that what he is saying is guaranteed to happen because the market is an unpredictable place and sometimes investments go sour. However, if you are going to have someone talk about investing by taking advantage of dark pools, he is one of the most qualified individuals.

Louis Navellier’s Dark Pools Summit is a webinar about investing based on how big-money investors are likely to invest. Louis Navellier has designed a system that gauges how the big money is likely to be invested and he makes his moves based on the information he gets from it.

As soon as you subscribe to his Breakthrough Stocks newsletter, you will receive all the details of his strategy as well as recommendations he wants you to consider.

Is his system reliable? Well, if his track record is anything to go by, it appears to be a solid strategy. But as we all know, past results do not guarantee future success when it comes to investing in the capital markets.

Therefore, if you are going to follow his recommendations, do not invest more money than you can afford to lose.