Welcome to my review of Charles Mizrahi’s Profits of A Lifetime Summit.

The presentation has been getting a lot of attention because Charles claims to have found a secret way for you to earn a lifetime of returns equaling 500% or more in 5 years.

In this article, I give you an overview of what was discussed at the summit as well as reveal what secret form of investment he is talking about. I also unveil the three companies he teases.

Profits of A Lifetime Summit Review

Introduction to Profits of A Lifetime Summit

Profits of A Lifetime Summit is an event that was hosted by John Burke but the limelight was squarely on Charles Mizrahi, who said that you can earn returns of 500% or more within 5 years by investing in a secret form of investment that he intended to reveal. 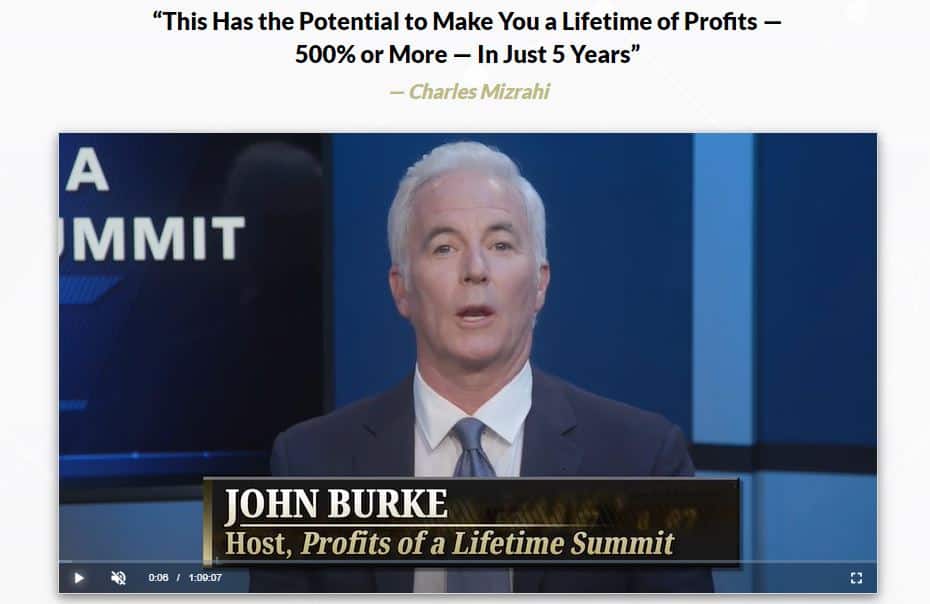 He reveals that his secret is investing in companies that are about to split in a spinoff.

A spinoff occurs when a company creates a new independent company out of part of its business by issuing and selling shares in the market. The newly formed company gets new leadership.

When a company does a spinoff, it has to file the SEC Form 10-12B with the SEC to formalize this process.

Companies conduct spinoffs for a variety of reasons and Charles believes that by doing this they open up an opportunity for investors to make money. Burke quotes a study by Deloitte that found that when a spinoff occurs, the parent and the new company double their value in the following year, on average.

To find the best spinoffs, Charles has a narrowing down process that is based on three core elements”

After analyzing various companies, he has identified three that he believes will conduct successful spinoffs.

Three Companies to Consider Investing In

Out of all the deals that are going on in the market, Mizrahi has found three that impress him.

The first company is a top leader in the drug industry that has made more than $39 billion in annual revenue for four consecutive years. It is pursuing multiple coronavirus vaccines that could earn it $100 billion. It intends to spin out one of its divisions with the new company expected to carry over 10,000 workers. The new company will have a CEO with over 30 years working for the parent company.

The second company is an industry leader in IT distribution, systems integration, and networking solutions. Millions of people rely on its services every day. It is involved in the manufacture of Xbox consoles, Microsoft Office, and it has a hand in most laptops, watches, and OLED TVs in circulation. It intends to spinoff its customer experience solutions division to a new company.

The third company is a $4 billion Atlanta-based retail company whose products and services have helped reshape American homes and lifestyles. It will spin off its financial division from its retail segment.

After extensive research, I think the three companies Mizrahi could be hinting at are Sanofi, the Microsoft Corporation, and Aaron’s respectively.

He has written a report called Spinoff Fortunes that he is giving away to people who sign up for his advisory service, Lifetime Profits.

Who is Behind the Profits of A Lifetime Summit?

Charles Mizrahi is an investment analyst who has been in the financial services industry for four decades. He has made a career out of speculating about the potentially best money making opportunities in the stock market.

Charles previously worked for million-dollar investment banks when he was on Wall Street. He even witnessed the market crash of 1987.

He was once named the No. 1 trader in the nation by Barron’s and his work has been featured on several renowned platforms like The Wall Street Journal, Barron’s, The New York Times, and MarketWatch. He is currently working for Banyan Hill publishing where he shares regular investment insights with main street Americans.

He runs two investment research services at the firm; Alpha Investor and Lifetime Profits (the subject of the presentation).

What you get when you join Lifetime Profits

Since I have already revealed the names of the three companies that were teased in the Profits of A Lifetime Summit, you don’t have to join the newsletter just to learn their names.

Lifetime Profits is a new advisory service that Charles launched to recommend “special situation” stock picks. These are companies he expects to witness massive growth because of a spinoffs, mergers, acquisitions, and other “special situations.”

If you still want to join the newsletter, here is what an annual subscription gets you:

Is Profits of A Lifetime Summit Legit?

Profits of a Lifetime Summit is legit because Charles reveals his new investment strategy; investing in companies that are about to spinoff. Statistically, these companies tend to do well in the long-term if the split is done for the right reasons. Therefore, he is right to be optimistic about the returns they may bring you if you follow his recommendations.

However, his three picks are not guaranteed to grow significantly after their respective spinoffs. Therefore, take his advice with a grain of salt.

Profits of A Lifetime Summit Summary

Profits of A Lifetime Summit debuts Charles Mizrahi’s new investment newsletter, Lifetime Profits. Charles intends to start giving recommendations of “special situation” investments involving things like spinoffs, mergers, acquisitions, activist investments and other events that are not covered in his other newsletter.

He recommends three companies, Sanofi, Microsoft, and Aarons, as good candidates for investment and although the statistics suggest that they will be good investments, you can never be certain due to market risks.

Mizrahi is advocating for a buy and hold approach in the presentation because he recommends that you keep your positions open for a few years.