Collapse 2019 is a new video from Banyan Hill warning you about a financial collapse that is supposedly already happening.

The question to ask though is whether Collapse 2019 is actually real, or is this just hype/scam to sell you another product?

I’ve been taking a closer look at the Collapse 2019 website and now I’m sharing my honest opinion.

The Collapse 2019 video is not on a unique website but it’s actually part of the Banyan Hill website. Banyan Hill Publishing who I recently reviewed are a financial publishing company who are part of Agora Financial. Agora Financial have been around for many years and are known for a number of financial publications (such as Fisher investments and the Genesis Investing System).

Banyan Hill is one of Agora’s companies and has been behind many controversial videos like the Collapse 2019 video. Earlier in 2018 they released a series of videos about special forms of stock investing as seen in Kennedy Accounts and how many people were in line for huge checks using “Freedom Checks”.

What I’m wondering and many others is whether Collapse 2019 is a genuine threat or is this just another marketing gimmick to sell us a newsletter? 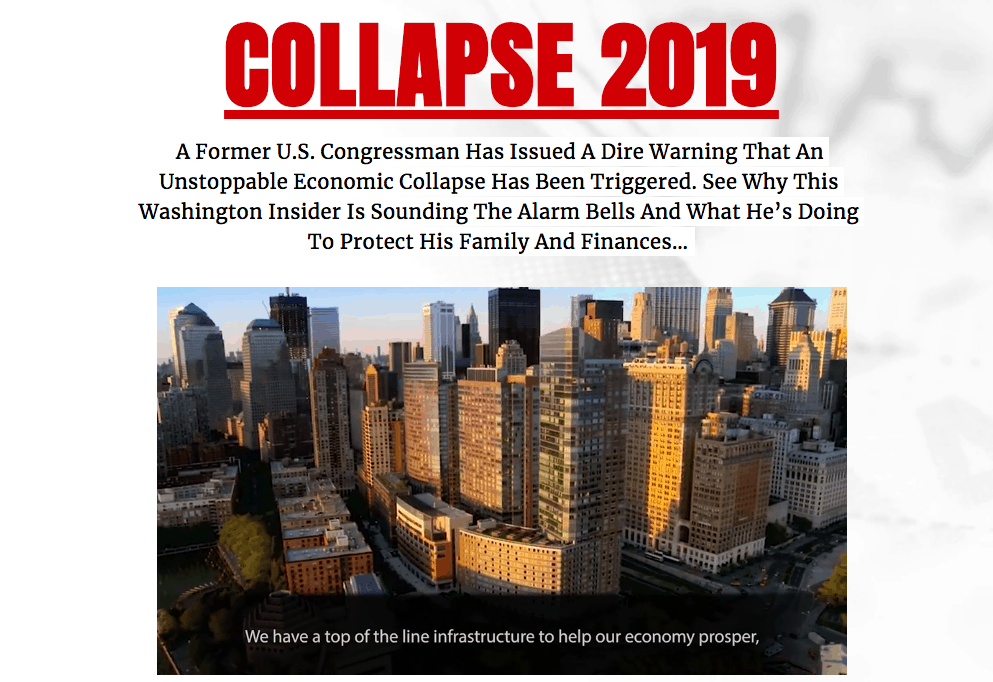 A Former U.S. Congressman Has Issued A Dire Warning That An Unstoppable Economic Collapse Has Been Triggered. See Why This Washington Insider Is Sounding The Alarm Bells And What He’s Doing To Protect His Family And Finances…

Of course that sounds extreme and the big bold COLLAPSE 2019 certainly makes you stop and pay attention to this video.

When you start watching the video it starts by talking about all the amazing things we currently have in the modern world like good schools (questionable…), good technology such as computers and phones, nice restaurants and coffee shops, nice cars and nice homes. Ultimately it is showing you how good the modern life we have is and how everything is going well right now since the stock market and economy in general has been on the rise!

It compares America to a nice family home. Here is the screen shot from the video: 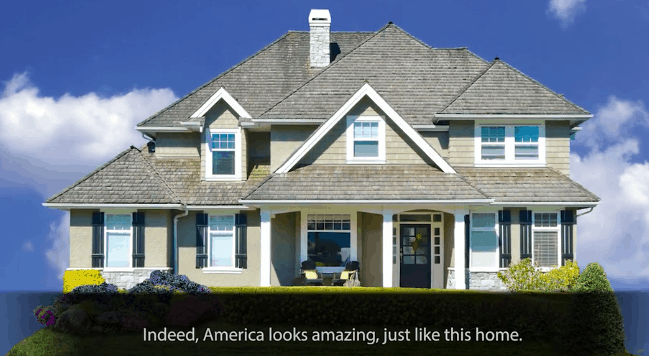 However the video then moves to show the foundations of the house and how cracks are showing and how these cracks are like what is happening in the American economy right now that will soon change everything, hence “Collapse 2019”.

The collapse that is referred to is actually quite scary and states that it will be like nothing we have ever seen in our lifetimes.

What Is Collapse 2019 Really About?

Apparently these cracks in the foundation of the economy are based on something that literally the whole economy is based on.

That is why when the “Collapse 2019” happens it will be extremely severe because the weak foundation has been what has actually enabled us to build everything that you see in the modern world from the infrastructure right through to the technology companies, oversized cars, coffee shops and all the other things mentioned at the start of the video.

In fact the video actually states the thing that will happen from the Collapse 2019 and it’s shocking to say the least and quite scary.

Take a look at this: 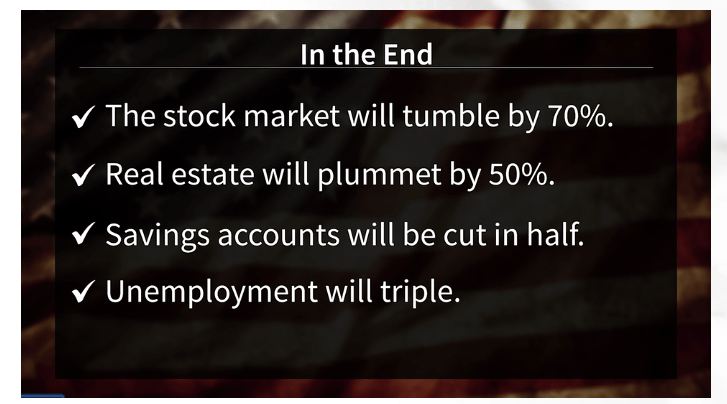 As the video claims:

Apparently the collapse has actually already started and if you are unprepared you could potentially feel the full effect of it, however those who are prepared can flip it on it’s head.

The video is actually narrated and presented by Robert Bauman (I recently reviewed one of his newsletters The Bauman Letter).

Robert is a financial expert who has worked with 6 former US presidents over the last 60 years. He’s been featured in a number of high profile publications including the New York Times.

After watching the full video and doing my research (including research I’ve already undertaken on Banyan Hill and the experts that are part of the team) I believe the real (cynical) truth is that this video has been created to sell you into their newsletter and they are using the fear of a Collapse 2019 to do that.

Does that mean a 2019 Collapse is not going to happen?

I honestly don’t know whether it will or won’t and neither do the people behind the Collapse 2019 video.

Now I will be 100% honest and say that the likes of Robert Bauman and the other experts at Banyan Hill know FAR MORE about the economy than I personally do.

If you’re looking for advice on the US economy and investing then I’m definitely NOT the right person to talk to and taking the advice of Robert Bauman and others is going to be more beneficial.

What I do know is internet marketing (aka digital marketing) and that Banyan Hill is a huge financial publishing company that makes millions a year selling newsletters online.

They are also part of Agora who make multi-millions a year selling financial newsletters and are well known in the digital marketing space as being industry leaders at selling online.

They are known for creating extremely controversial yet highly converting videos on the topic of investing to get you to buy into their financial newsletters.

I don’t believe it’s a scam.

After all the team behind the Collapse 2019 video do have a lot of experience at investing and a proven track record.

I just think you need to see the full picture that is simply that they do want to sell you a paid newsletter subscription and ultimately the video is quite extreme in order to do this.

After taking a closer look and watching the video I believe that the primary objective of this video is not to warn you about a crash but to actually sell you into a paid financial newsletter. After all Banyan Hill is extremely good at doing this and they have done it dozens of times before with other videos. They are experts are selling, they create amazing angles in their videos to sell you into their newsletters.

Should you be worried about a crash? For sure it’s always worth staying ahead of these things and it’s absolutely possible that they are correct about a 2019 Collapse, but I do think the primary goal of the video is to sell you their newsletter so it’s always worth taking the information with a pitch of salt.

On the flip side, if you are looking to get started investing this could be the perfect place for you to start.