Welcome to my review of Jeff Brown’s Tech Melt presentation on the Second Wave Illumina pitch.

Jeff Brown recently sat down with Chris Hurt to talk about market trends, the 5,900% biotech boom and his number one stock pick to capitalize on it.

I watched the presentation and decided to write this review to give you an overview of what they discussed. I also unveil the name of the number one stock Jeff was touting during the pitch.

Before we start, I should clarify that what Jeff meant by “Second Wave” has nothing to do with a spike in infections, rather it refers to a possible second market crash.

Jeff Brown’s Tech Melt is a presentation by Brown (hosted by Chris Hurt) during which he pitches his tech investment advisory service, The Near Future Report. 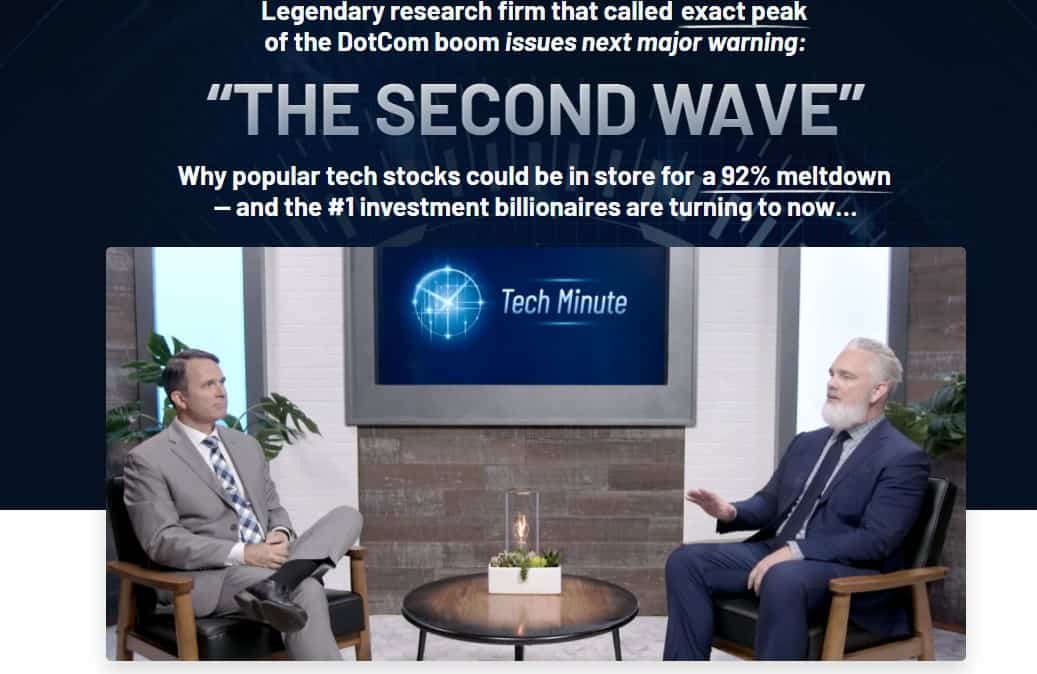 A majority of the conversation, however, centers on investing in biotech stocks with Jeff setting his sights on the one stock that he thinks could make for a good investment.

But before Jeff starts dropping hints regarding his number one stock, he fires a warning about getting carried away by the stock market rally that has been taking place. He mentions that although tech stocks have been driving the recovery, they are not sound investments and we should not get too excited about them.

He goes on to say that some tech stocks are massively overvalued and that they may shed up to 92% of their value, which is reminiscent of the Dot Com bust at the turn of the millennium.

He suggests that investors should instead turn to biotech stocks, which he claims are “market resistant.” He argues that they are going to be shielded from a potential market crash because most of them are working on vaccines and therapies for the coronavirus.

He has identified one company that will lead the 5,900% biotech boom. He shares the following clues about it:

Jeff shares all the details about the mysterious company in a report called The #1 Biotech Stock 0f 2020: Why the FDA Just Fast-Tracked the “King of Genetic Sequencing.”

The only way to get your hands on the report for free is by subscribing to his premium tech newsletter, The Near Future Report.

I took it upon myself to uncover the name of the company he teases in the presentation and found out that it is Illumina (ILMN).

Illumina creates integrated systems that analyze genetic variation and biological function, which is just another way of describing genome sequencing.

It also matches the clues that Jeff dropped during the presentation; Dr. Scott Gottlieb joined its board in February 2020 and in June, it received Emergency Use Authorization from the FDA for its testing equipment.

Who is behind Jeff Brown’s Tech Melt?

Jeff Brown is a tech investment guru with 25 years’ experience as a high-technology executive, angel investor, and investment analyst. He is the founder of Brownstone Research, which is affiliated with Bonner & Partners.

During his career, he has worked for companies that specialize in semiconductors, broadcasting and video technology, technology infrastructure, IT, and consumer electronics.

In addition to working for big companies like Qualcomm and NXP Semiconductors, he has built early-stage startups, which gives him an edge as an angel investor because he knows the industry intimately and sees things before most other analysts.

In addition to The Near Future Report, he edits Early Stage Trader, Exponential Tech Investor, and a free newsletter called The Bleeding Edge.

What you get when you join The Near Future Report

In addition to the first report, if you sign up for the Near Future Report, you also receive the following reports from Jeff Brown for free:

You also receive monthly issues of the newsletter, weekly updates, access to the encrypted website, and customer support.

The annual subscription fee for The Near Future Report is $49.

The subscription comes with a 60-day money-back guarantee that entitles you to a full refund in case you decide to cancel your subscription.

Jeff Brown is an experienced tech investment analyst with 25 years of experience either working as an executive for major tech firms or running and funding early-stage startups. Taking that into account, I think he is qualified to be giving his opinion about biotech investments.

Notwithstanding his experience, I think Jeff raises a valid point about the market recovery i.e. it is not backed up by a strong economy and may crumble if the true state of the economy gets priced in.

I am not in favor of focusing on one stock pick although Illumina appears to have a few things going for it. Only time will tell whether he was right about it.

Jeff Brown’s Tech Melt features a rather dramatic prediction from Brown that some tech stocks are going to crash, losing up to 92% of their value and taking the market down with them – hence the “Second Wave” references.

To some extent, it makes sense that he is cautioning us against getting carried away by the recovery because it is a bit odd how the stock market has roared back to its pre-pandemic highs (even surpassing them as I write this on 24th August) while the economy has yet to pick itself back up, at least to its pre-lockdown state.

Some analysts agree with Jeff’s stance and believe that it may all come crumbling down because some stocks that are soaring are not backed up by solid fundamentals.

Therefore, Jeff’s solution is to invest in biotech stocks, which he considers “market resistant.” And at a time when biotech stocks are doing well, buoyed by renewed interest from both governments and investors, not to mention their starring role in developing coronavirus vaccines and treatments, his argument is also valid.

That being said, only time will tell whether his number one pick will do as well as he claims it will.