Jeff Brown’s “The #1 Microchip Stock Of 2022” is a freshly released presentation by Brownstone Research where Jeff sounds off on what he considers the most promising stock in microchips.

Jeff, whose reputation of successfully predicting the top tech stock of 2016, 2018, 2019, and 2020, now believes to have found his pick for 2022. He believes that this company may end the global chip shortage.

In this article, I’ll give you an overview of the pitch, highlighting what company Jeff Brown is talking about as well as the others he considers alternative investments to the main one.

Jeff Brown believes that the global chip shortage that we’ve had to deal with since COVID-19 was declared a pandemic and countries locked down may be solved by one company.

He calls this company the #1 microchip stock of 2022 because to him, it’s the most important player in the sector. 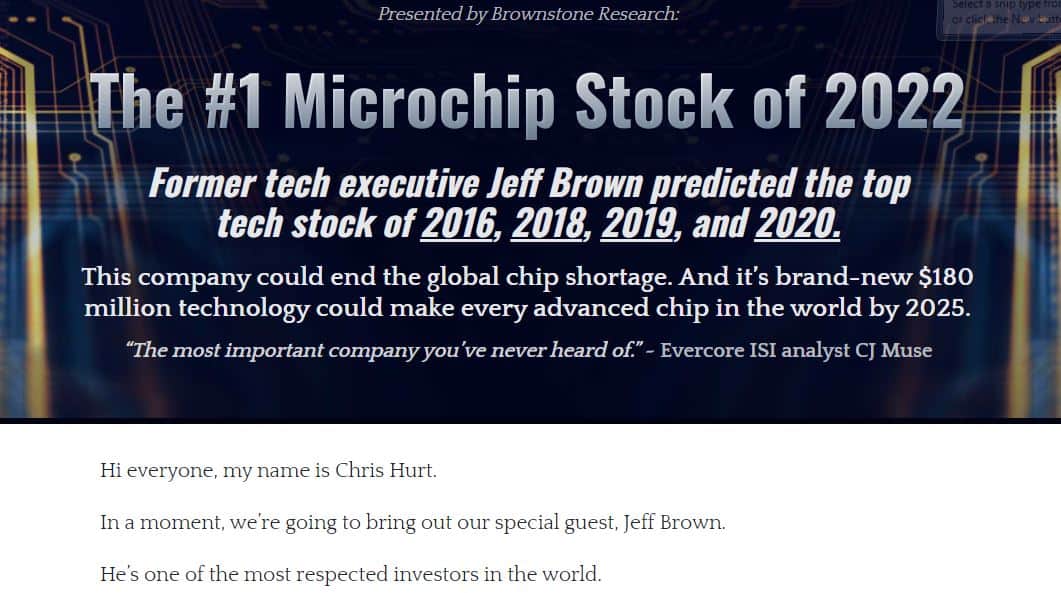 Earlier this year, Jeff Brown released another presentation talking about the Global Chip Shortage. The presentation, which was called “The Tech Shock Portfolio,” was about how we are about to see a major shortage of semiconductors and how some companies would emerge and dominate the new order as others fell to the wayside.

In this new presentation, Jeff is more focused on the companies that will make computer chips and meet the heightened demand caused by supply shortages.

To better understand the Global Chip Shortage, Jeff explains that there are two categories of computer chips: Simple chips and advanced chips.

Simple chips are found in simple devices like refrigerators and other appliances. A distinct feature of simple chips is that they are manufactured by mature processes and they handle simple functions.

Advanced chips, on the other hand, are designed for more complex applications like the Internet of Things, Artificial intelligence, Metaverse technology, Blockchain technology, and Self-driving cars.

The Global Chip Shortage was particularly damaging because it hit both categories of chips (but more severe on the “simple chips” than the “advanced chips”).

In this presentation, Jeff Brown focuses on the “advanced chips” because the company he is teasing deals with those.

The company in focus is one that makes “advanced chips.”

According to Jeff, this company can end the global chip shortage because it has a brand-new $180 million technology that will fabricate every advanced chip in the world by 2025.

The new $180 million machine he is referring to is called EUV, short for Extreme Ultra Violet Light. 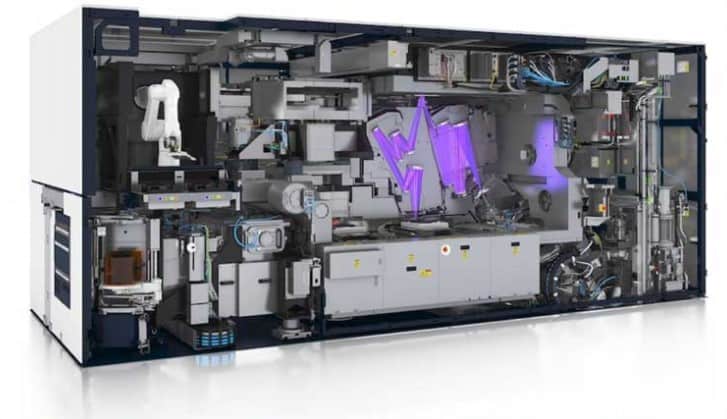 The EUV machine is used to make advanced chips. It has the most advanced lasers ever and has been dubbed by some within the industry “the most complicated machine humans have ever made.”

This company currently controls 60% of chip lithography and it owns 100% of the EUV market. Jeff says that he expects that as EUV revenue rises in the next few years, it will soon make up at least 66% of the company’s total revenue.

In 2020, this company was making 35 EUV machines but by 2025, they are expected to double that to meet the rising demand. 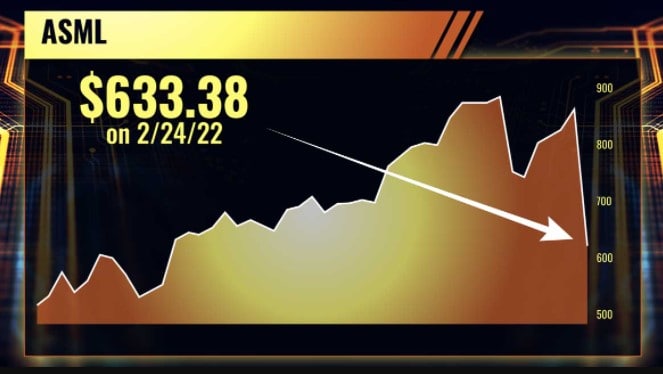 ASML Holdings N.V. is a Dutch multinational company that was founded in 1984 and specializes in the development and manufacturing of photolithography systems.

Jeff Brown wants you to consider investing in two other companies, besides ASML, that will also help solve the chip shortage. Here is a description of each of them:

Jeff says that this company is perfectly positioned to take advantage of the electric vehicle industry.

It makes specially-designed microchips for electric vehicles and is already one of the top suppliers. As the EV market grows, Jeff sees this company growing too.

The third stock is in the business of cloud computing.

Now, Jeff expects this company to lead the data processing and cloud computing for the foreseeable and it already has plants in 13 different countries. It has better infrastructure than its competition.

Jeff thinks that it is currently undervalued and worth a shout if you are interested in a value stock. 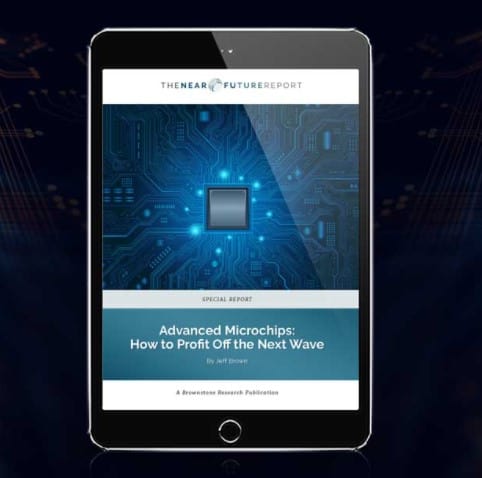 Jeff Brown put together a report that outlines everything you need to know about these two companies to invest. It is called Advanced Microchips: How to Profit Off the Next Wave.

To get this report for free, you must become a member of Jeff Brown’s The Near Future Report.

Who is Jeff Brown?

Jeff Brown is a famous investment analyst who founded Brownstone Research in 2020. It is a financial publishing firm that was launched in 2020 to offer general investment advice to individual investors.

Jeff Brown has had a career spanning decades within the world of technology. He has worked for world-famous technology firms like Qualcomm, NXP Semiconductors, and Juniper Networks. He is also an angel investor who finds promising startups and invests in them. He is always on the lookout for angel investment opportunities.

Jeff completed an undergraduate degree from Purdue University and a master’s degree in management from the London Business School. He has professional certificates from MIT, Stanford, UC Berkeley’s School of Law, and the National University of Singapore.

How Does Jeff Brown’s The Near Future Report Work?

Jeff Brown’s The Near Future Report is his most popular financial newsletter, besides the e-letter he writes called The Bleeding Edge.

As we’ve seen so far, Jeff’s presentation is about what he considers the number one microchip stock of 2022. He has even composed a special report called Advanced Microchips: How to Profit off the Next Wave that details how to make profits from it along with two other companies that may help solve the global chip shortage.

To get this report for free, you have to subscribe to The Near Future Report.

Other benefits that come with this subscription include:

You also get these two reports for free:

The 3 Heroes of the Chip Shortage

This special report focuses on three companies that Jeff claims are playing a vital role in bringing the current chip shortage crisis to an end. 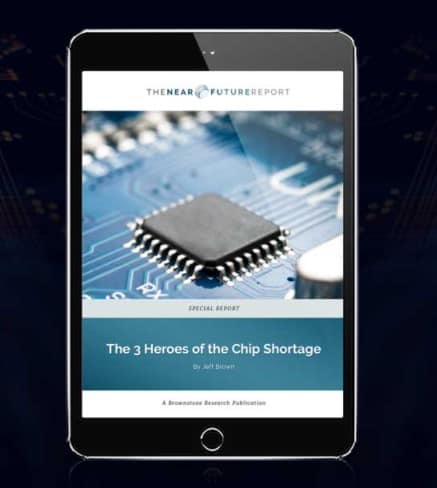 The first company has the largest pure-play semiconductor foundry in the world. It makes more than 13 million chips a year at just one of its locations and with increased demand for its chips, it stands to grow even bigger.

This company is known for custom-building chips for companies like Apple, Qualcomm, Broadcom, Nvidia, and Sony. Its top 10 customers have a combined market cap of over $6 trillion.

This company is investing $100 Billion to increase its chip-producing capabilities.

The second company is a leader in graphics processing units (GPUs). Its server processors are considered among the best on the market.

The third company makes semiconductors for 5G wireless base stations as well as consumer electronics like smartphones. They are also used in cars, as well as sensors used for the Internet of Things.

This report walks you through the world of NFTs as Jeff answers some of the most frequently asked questions about NFTs. 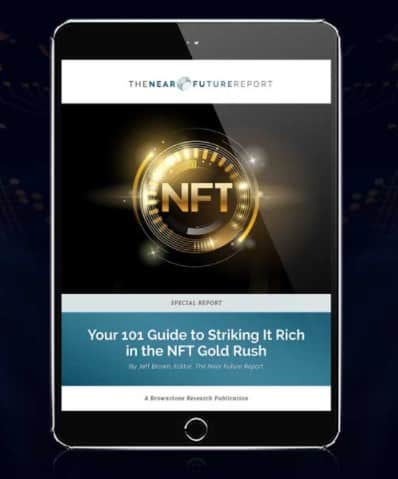 For example, he details what NFTs are, how they work, how you can buy them, which ones you should avoid, and how to profit off of them.

This report doesn’t come as a surprise because Jeff has been writing about NFTs for the past few months. He even did a presentation called “NFT Moment Coins.”

The Near Future Report Subscription Price

The subscription costs $49 in the first year and renews for $129 (plus taxes).

It has a 60-day money-back guarantee.

Yes, Jeff Brown’s #1 Microchip Stock Of 2022 is a legit presentation.

And that’s without taking into account his track record of picking winning stocks over the years. Therefore, when he says that the he has found a company that may be the answer for the global chip shortage, you can take him seriously.

That being said, his past experiences and successes are not a guarantee that he will be right about the market this time. He may be wrong and all his recommendations may flop. Therefore, you should be open minded, but with a healthy dose of skepticism.

After watching Jeff Brown’s presentation, I could tell that he knows his way around the technology sector. He says that he has been picking winning stocks and has been quite successful at it.

This time, he has shifted his focus to the semiconductor subsector saying that one company has a solution to the chip shortage, which he believes will make the stock soar in the next few years.

He is right about the fact that chip makers are hard at work making them because there is a worldwide shortage. And this demand will forge a new path for some companies to perform well in the stock market.

As of writing this, the stocks he touts haven’t hit the heights he anticipates thus it will be interesting to see how that pans out. Take that into consideration if you are going to follow his advice.