Brownstone Research recently published a webinar by Jeff Brown where he was interviewed by Chris Hurt. The event has had numerous titles such as “The Event” and in other versions of it, “The Final Wave” and the “Tech Wreck”.

Either way, it centered on what he deems “an extinction level event headed for the stock market” that he believes will cause a massive shift in wealth.

Jeff proposed ways you can prepare for the event and he discussed those at the event. We will take a closer look at what Jeff was referring to and the investment advisory service he promoted at the event.

Introduction to Jeff Brown The Event

Jeff Brown has been telling his readers that he thinks that there is an extinction-level event headed for the market that he suggests will create massive changes worth looking into.

He says that he has found a way to deal with it and that’s what this webinar is all about: he will explain how he thinks the market will be like in the foreseeable future and how he thinks investors should prepare. 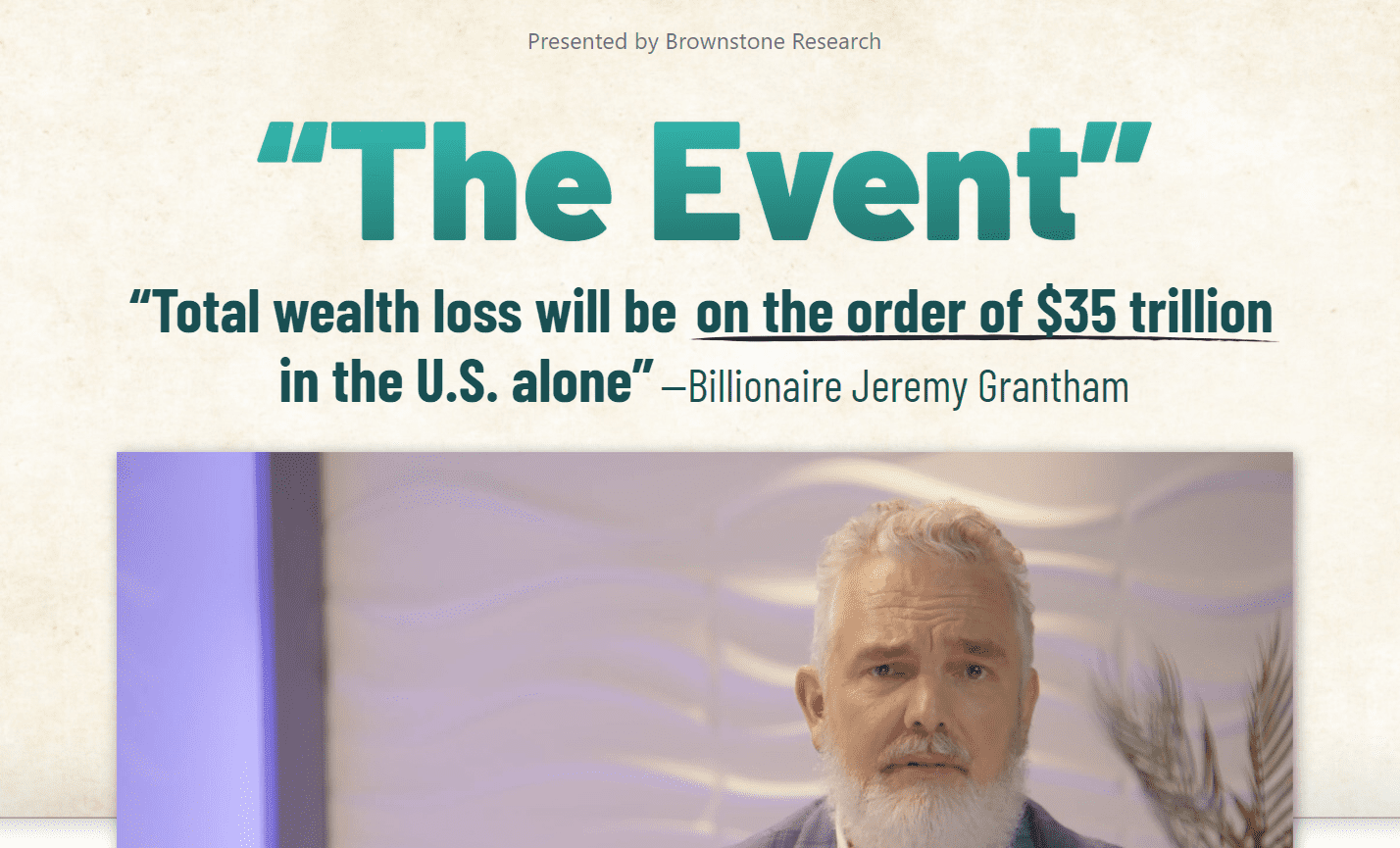 Jeff Brown has for years been observing the market and sharing his views with his followers. On here, we’ve examined a couple of presentations he has shared like Gte Technology, The Convergence and The Last American Dollar, just to mention a few where he has told readers where the best investments are and how retail investors ought to prepare.

This year, the economy and the markets have been through a great deal of turbulence. Factors like inflation, supply shortages, labor shortages, and other impactful events have played a hand in how things have panned out and analysts like Jeff have given us their takes on where the economy and the capital markets are headed.

In this event, Jeff revealed that there are investments he thinks we ought to avoid in what he’s calling “the final wave” (“the Final Wave” is what he uses to refer to the next wave of price movements in the market).

Jeff Brown is neither with the bullish investors or the bears because he thinks that the two camps are both right and wrong because they have been misinterpreting the market.

For example, he says that investors have misinterpreted what the Nasdaq has been indicating. He says, and I quote:

“The Nasdaq has over 2,500 different tech stocks…

But when you take out the 5 biggest ones…

I’m talking about tech giants like Apple and Amazon…

So, he believes that most investors have a distorted view of how the NASDAQ has performed because if you take out the tech giants, it should have done worse than it did.

Another thing Jeff Brown is rallying against is what he calls “bargain” tech stocks. He thinks that backing certain tech companies in the hope that they will bounce back soon is a mistake because he sees them going even lower, even sinking another 80%.

Jeff Brown has many predictions for 2022 which we have already covered. Jeff does not see the market as black and white. He says that some stocks are good bargains right now but others are ridiculously overpriced. Therefore, he thinks that people should go for the bargains and avoid the overpriced stocks.

He agrees with the experts who are saying that we should expect a big market crash on top of the correction that we’ve witnessed this year that has wiped out significant portions of the values of some of the high-flying stocks of last year.

He is of the opinion that we should not expect a big crash just because the Fed is raising interest rates to combat inflation.

Why has he taken that stand? He does not expect the interest rates hikes to be that big, particularly this year because it is an election year and the incumbents who want to retain control of the government would not want to see the market crash another 20-25% before the election. We’ve seen similar predictions by other experts like Nomi Prins and Jim Rickards.

Jeff thinks that you shouldn’t follow the rest of the market and sell (to keep cash) because you will not only miss the potential big winners but also inflation will eat away at your savings.

He also advises you not to do passive investing. He says, and I quote:

“This isn’t a market where you can ignore what’s happening. The era of passive investing… where you blindly put money, your faith in some big index fund, ETF. That’s over… We’ve entered a new era. The era of the stock picker.”

He thinks that active investors are better suited to the market and, of course, he is a perfect example of that kind of person. Basically, he is telling you to turn to a guy like him who’ll give you stock picks with you at a fee.

As we expect with this kind of event, Jeff has a company that he thinks will do well. He is going for it because it is in Artificial Intelligence (AI), which he thinks is the next frontier of technological development. One of his recent pitches about SCG echo’d similar thoughts.

Why this company in particular? Well, it’s because it is playing a critical role in spearheading the advancement of Artificial Intelligence (AI).

He says that this company is at the forefront of ALL the world’s most advanced “AI” semiconductor chips:

As New Street Research says, their technology “is the most difficult to replicate.” They estimate it would take China more than 10 years to catch up.

They’ve got an absolute monopoly on this market.

It’s so big that Quartz [a publication] even called it “the linchpin in solving the world’s microchip problem”.

And that’s just the beginning…

Because, Chris—right now, as we speak—they’re on the verge of releasing a new machine three times as powerful as their previous technology. CNBC says this new machine is “set to transform chipmaking” and “investors (were) going wild.”

Right now, they’re sitting on a massive backlog of orders…

As of right now, it’s an absolute steal…

That’s why JP Morgan, for example…

He has written everything you need to know about this company in a special report called The $15.7 Trillion Revolution: The #1 AI Stock for 2022. 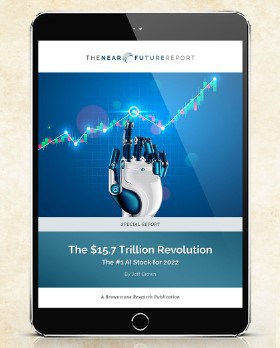 You can get the report for free if you sign up for The Near Future Report, his flagship technology investing letter.

Who Is Behind Jeff Brown The Event?

The event is designed by none other than Jeff Brown. He is the founder and chief investment analyst for Brownstone Research.

He has more than 25 years of experience as a high-technology executive and during that time, he has worked for big technology companies like Qualcomm, NXP Semiconductors, and Juniper Networks.

His strategy as an investor mostly surrounds early stage technology companies that can offer big gains in a short time.

The thing that makes Jeff Brown suited to the role of an investment analyst is that he has wide technology experience, starting from semiconductors, mobility, broadcasting, and video technology to technology infrastructure, IT networking and security, automotive, consumer electronics, etc.

Based on his technology, business, finance, and investing expertise, he likes to help everyday investors find companies on the verge of exponential growth. This time, as always, he has done his research and come up with his favorite picks as well as certain stocks that he thinks you should avoid.

How Does The Near Future Report Work?

To get the report about Jeff’s top AI pick, you must be a member of The Near Future Report. It is the flagship newsletter of his publishing firm, Brownstone Research, and through it he shares his insights into how the technology landscape will shape out. 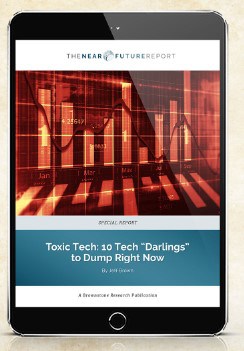 He has also written another special report called Toxic Tech: 10 Tech “Darlings” to Dump Right Now. It has details about certain tech companies that he thinks you should avoid at all costs. You also get that when you sign up for The Near Future Report.

According to him, this is the time to be even more cautious and that’s why he has come up with a list of toxic tech stocks that you should avoid right away. 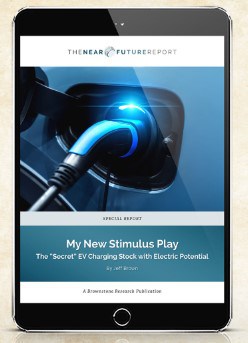 In addition to that, Jeff Brown will also send you the full name, stock ticker, and write-up on the number one EV charging company. The report is called My New Stimulus Play: The “Secret” EV Charging Stock with Electric Potential. 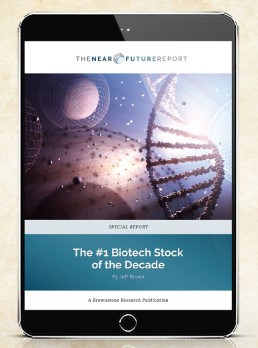 The other report is called The #1 Biotech Stock of the Decade and you get it when you sign up for the newsletter too. In it he provides you with the name of of a biotech stock you should look into.

Then there is “The One-Page “Final Wave” Blueprint,” a special report about Jeff’s strategy.

You will get access to these five reports only when you opt for the subscription to The Near Future Report.

The Near Future Report Subscription Fee and Guarantee

The subscription price is $49/year for your first year. Then it renews every year for $129 (plus applicable taxes). If you don’t want it to renew, cancel before the renewal day. 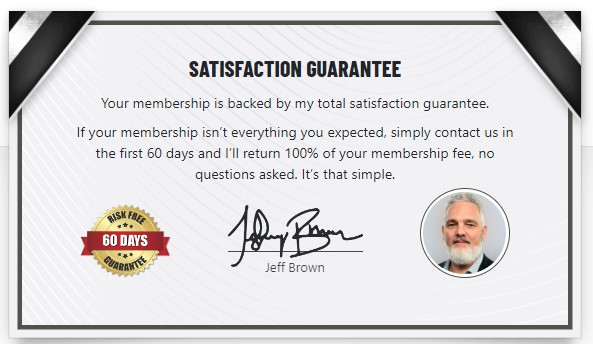 The newsletter has a 60-day money-back guarantee.

You should always check the terms and conditions page to confirm this because it may change without warning.

Is Jeff Brown The Event aka Tech Wreck Legit?

Yes, Jeff Brown The Event is a legit webinar where he gives his opinion on the market and the economy as a whole. Jeff Brown is the founder and chief investment analyst for Brownstone Research, a legitimate firm that publishes financial research targeting individual investors.

He also has more than 25 years of experience in the tech sector and has worked for more than six years as an investment expert and advisor. He is the editor of several newsletter services. Therefore, he has the credentials to be hosting such an event and is worth looking into.

That being said, he is not immune to being wrong about the market. After all, he still makes bad calls that lose money just like any other investment analyst.

Jeff Brown has composed a set of five reports with his recommended picks. All you need to do is subscribe to The Near Future Report to receive access to those reports. In case you are unsatisfied with the advisory service, you can opt for a refund.

If you sign up for it, Jeff is going to share with you the name of his number #1 recommendation and he tells us that the last time he made such a prediction, his recommended stock soared 1277% in 9 months. The stock belongs to a little-known company at the heart of the MASSIVE trend in artificial intelligence trend worth $31 billion. This time, he is also sharing the toxic tech stocks you should avoid.

Before you sign up for his advisory service or follow his advice, objectively look into them to ascertain that they align with your perspective and individual strategy.