Welcome to my review of the $6 Semiconductor Company (Forever Memory) presentation.

I recently came across Alex Koyfman’s latest presentation and was keen to find out what $6 Semiconductor company he was teasing that could turn $1,000 into a $313,000 windfall if a “December event” happens.

So, I sat through the presentation, did a bit of research to learn more about it before putting together this review. In it, I summarize the presentation revealing what event he was talking about and what company he may be teasing.

The $6 Semiconductor Company is a presentation by Alex Koyfman meant to promote his newsletter, the Microcap Insider. Beyond that, he uses it to tout a semiconductor company that manufactures memory chips (he refers to them as forever memory).

He begins the presentation by talking about the proliferation of the Internet of Things (IoT) phenomenon. He talks of how computer chips are being embedded in devices to form ecosystems of intercommunicating devices. He gives an example of “tiny computers” being embedded in basketballs to measure spin rate, ball speed, timing, throw rate, velocity, launch angle, and other metrics to help players and teams improve their performance. 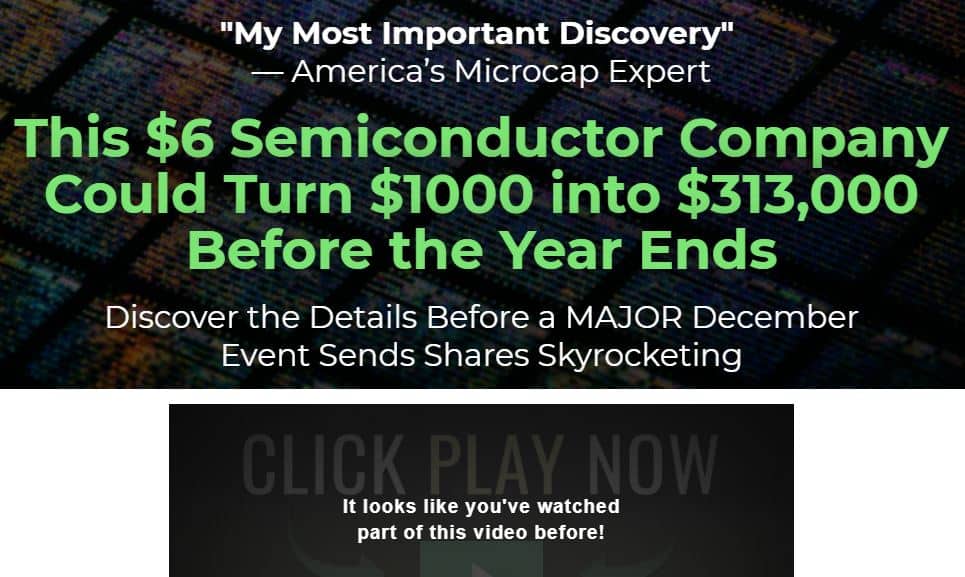 He argues that although the tiny computers can pick up critical data in real-time, there are limitations to the memory they currently use; it is volatile memory. The main hurdle is that they consume a lot of energy and they can lose data very quickly if their batteries run out.

And that’s where the $6 Semiconductor Company comes in with its “forever memory.” It is a tiny tech firm that is manufacturing an ultrafast memory chip that can hold data for as long as twenty years without consuming any power making it perfect for IoT devices.

According to Alex, the world will have at least a trillion IoT devices by 2035; therefore, there will be demand for the enhanced memory chips it makes and that will boost its valuation.

What is the December event?

Alex acknowledges that 5G will have to be ubiquitous if IoT is going to become a major trend, and many experts agree with him on this. However, as he correctly points out, short-wave 5G (which, though superfast, can easily be blocked by obstacles) is not the answer to the 5G problem.

Instead, he says that the answer lies in “C-band” 5G which is currently reserved for the government and the military. However, it is better suited to IoT and in December, the FCC will allow network carriers to use it. That’s where the December event factors in.

Who Is Behind the “$6 Semiconductor Company” Presentation?

Alex Koyfman is not a typical investment “guru” because he has never worked for a Wall Street firm, hedge fund, or any other similar instittutions.

Nevertheless, he has been in the investment research business for almost two decades. He started his career as a self-taught trader in his late teens as a hobby before turning it into a full-time career in his 20s.

Alex decided to specialize in tech companies, particularly smaller ones. He ran a financial blog for a few years, which caught the attention of the editors at Angel Publishing. They brought him in and he started editing newsletters for the firm.

He currently heads up a newsletter called Microcap Insider that he’s been editing for six years now. He claims that so far, the startups he has recommended have grown into billion-dollar entities.

How to invest in the $6 Semiconductor Company

Alex Koyfman wrote a report about the small semiconductor company sharing the details you’d need to invest in it including the name and its ticker symbol. The report is called Forever Memory: Retire Rich on the Semiconductor Revolution.

However, to get your free copy, you have to subscribe to his newsletter, the Microcap Insider.

This will include weekly issues of the Microcap Insider newsletter service.

In addition to the free report, if you sign up you will also be entitled to…

How much do you pay to join Microcap Insider?

I think Alex Koyfman’s presentation about the $6 Semiconductor Company is legit.

During the pitch, although he takes the long way around it, he acknowledges the correlation between 5G and IoT. He also ties it all in nicely with the need for better memory chips to service the IoT devices and everything makes sense.

However, his claim that you can turn a $1,000 investment into $313,000 is a bit over the top. While it is possible, there are no guarantees that you can pull it off.

That doesn’t mean that the pitch is not legit because he merely gives his opinion and you can either agree with him or reject his proposals.

Alex Koyfman’s presentation about a $6 Semiconductor Company behind the “forever memory” was indirectly intended to promote his Microcap Insider newsletter.

You will most likely not see such a return within a short period as he suggests because whenever a technology company comes up with a good product, no matter how good it is, it takes time for it to become a massive company.

Therefore, if you decide to invest in the company (and Alex’s newsletter), you will need to be patient with these kinds of stocks because they take time for the valuations to “reach their potential.” In the case of the company he is touting, there are many moving parts (5G is also involved) and that in itself tells you it is not going to be a short-term fix.